And the Oscar for best kiss goes to …

Why do celebrities kiss so beautifully in the movies and so badly in real life? In the cinema when the guy kisses the girl, we sigh. In real life, we groan.

It was only after writing an article about romantic chemistry and spending hours on Google trying to find pictures of passionate celebrity smooches that I realized just how bad they are. Google “celebrity kisses” and you’ll see what I mean. You hope for something that’ll make you lean forward but what you get makes you step back. How can so many beautiful people do such a beautiful thing in such an ugly way?

Some pictures are awkward and some are inappropriate, but most are about as sexy as watching paint tongue the plaster. 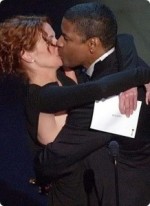 Certainly, the paparazzi get their share of the blame. Celebrities can’t pose with their best side to the camera when the don’t know they’re being photographed.

But still. Photographs of a lot of these celebrity smooches are taken on the red carpet, where the lighting is good and the actors know they’re being photographed. Is it too much to ask movie stars to act as if they’re in love? I mean, it’s all for show anyway. If an actress can fake an orgasm on the silver screen, why can’t she fake intimacy on the red carpet?

After looking at hundreds of pictures of terrible smooches I yelled at my laptop, “Somebody, please, suspend my disbelief!”

We expect a lot out of our celebrity kisses — passion, tenderness, sexual hunger, affection, but we rarely get it, off-screen. The only time you really see it is when you’re not supposed to. When a photographer captures an authentically intimate moment it usually means the celebrity didn’t know they were being photographed. Unfortunately, privacy is the price of authenticity. You can’t get one without violating the other. I started feeling like a peeping tom when I saw some of these pics.

That’s saying a lot from the host of a TV show that uses cameras in the bedroom to improve sex lives.

In my search for the perfect celebrity kiss, I measured how far the pictures sent me from my own reality. It’s only when you’re in orbit looking down that you see what these pictures have in common — things that we should all take note of when we kiss, whether we’re being photographed or not:

1. Close your eyes. Or look into your partner’s eyes. Don’t look away.

2. Square your shoulders. It puts your lover front and center, lessening distractions.

3. Lean in. Intimacy is allergic to space.

4. Don’t pucker up till your lips touch.

5. Use your hands. Caress your partner’s face, grab the hair, double your pleasure.

With those five factors in mind, I’m proud to present my collection of the best celebrity kisses on the internet.

All of them prove my contention that when the guy kisses the girl, it’s the audience that should stay kissed.