An Atlanta musical made from recovery

Author, blogger and longtime AIDS activist Mark King is a force behind a multi-media show in Atlanta on Saturday that is raising money for an upcoming conference for gay men and lesbians in recovery.

King is part of the ensemble cast of “Anita Will Recover,” a musical comedy that follows drag queen Anita Mann (photo) as she stares down her selfishness and works to recover from drug abuse. Along the way, she gets help from others with a longer track record of sobriety. The show incorporates live singing and dancing, comedy and video projection. 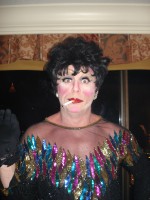 “Anita was created during my stint with the Armorettes in the 90’s,” says King, who wrote the show. “So it’s been fun to resurrect Anita and put her in the context of recovery.”

The show is a fundraiser for Hotlanta Roundup 2009, a conference set for Sept. 4-7 in Atlanta that focuses on gay men and lesbians in recovery.

“We are by no means a glum lot,” says Nina S, chair of Hotlanta Roundup 2009. “This show is flat-out hilarious. It has something to say about the pure joy that can found in living a clean and sober life. And it has the humor that only our wacky community could provide.”