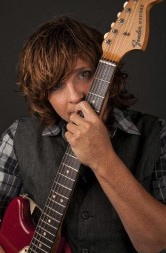 Amy Ray, one half of legendary local lesbian duo Indigo Girls, is putting the finishing touches on a new solo album and performing live shows this week to preview it. We chat with the artist as “Lung of Love” hits Dahlonega this weekend with opening act Roxie Watson.

“I am totally excited for the Dahlonega shows because I am playing acoustic sets with one of the best songwriters around, Lindsay Fuller, and her magnificently groovy guitar/Dobro player, Jeff Fielder,” Ray says. “Alterna-grass favorite Roxie Watson will also be sharing the stage, so it’s likely to be a complete musical throw down.”

Awesome. After a Wednesday show in Athens and even before the album drops next month, three shows Friday through Sunday at Dahlonega’s Crimson Moon should be an epic preview for those gay Atlanta fans who just can’t get enough of one of our own. But what the hell is a “Lung of Love”?

“The lung of love is my singing voice,” Ray says. “That is what comes out of me; but always in a struggle with its own clumsiness and frailty.”

Ray wrote the title song after being on the road, thinking about the struggle to rekindle love after absence. The lung, not the heart, stood out as the inspiring element in all that she did.

Besides previews of “Lung of Love,” Ray also promises to play “some old A.R. and IG songs.”

Hopefully some of these favorite powerhouse solo songs make the set list:

“Lung of Love” is scheduled for release on Feb. 28. Visit Ray online.

Buck Cooke is a freelance writer based in Atlanta and co-chair of the Entertainment Committee for Atlanta Pride. He comes armed with a passion for pop culture and rabid appetite for arts and entertainment, scouring the landscape for treasures in music, TV, books and cinema.