“American Idol's” other openly gay contestant – don't confuse her with gay Atlanta's semi-finalist – stunned with an intimate performance on Wednesday during the show's first live episode. Her two moms, and a trio of judges, approved.

MK Nobilette, the 20-year-old from San Francisco, nailed her rendition of John Legend's “All of Me” as she sang ninth out of the 10 singers that performed. Now, she faces face a vote by fans of the show. Her two moms could barely contain themselves. Neither could judge Harry Connick Jr., who was moved by Nobilette's coming out during an episode last week.

“I think you are an elegant, articulate singer,” Connick gushes. “For the first time, I didn't get the sense that you had you this kind of defeatist attitude. Because for a while you looked like do you really belong here? You belong here.”

Can gay Atlanta's own eye-rolling Emmanuel Zidor top that if he gets to perform during Wednesday's live show? Let's hope so. Or at least give us that promised walk-off with J-Lo. 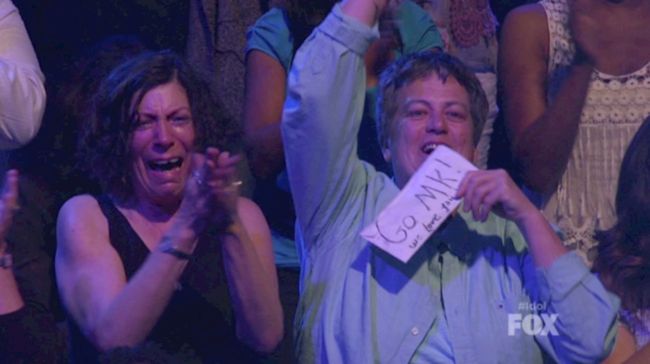