All Mary Edith Pitts wants is you for her birthday

Pitts (top and bottom photos, no pun inteded) doesn’t ask for birthday presents each year. The only thing she wants is for you to enjoy the show at Jungle – complete with a hunk auction, silent auction and tons of special guests – and to know that the money raised goes to Jerusalem House. Handing over the funds to one of her favorite HIV/AIDS charities is so much better than “presents, flower or dinners,” she tells Project Q Atlanta.

“Jerusalem House believes ‘Housing is Healthcare’ for homeless and low-income individuals and families living with HIV/AIDS and leads the Atlanta community to meet the needs of this population,” Pitts says of her beneficiary. “What impresses me most about the organization is 91 cents of every dollar raised goes to program services.” 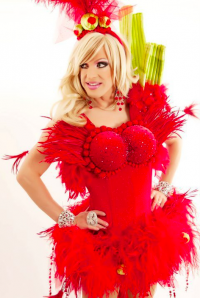 While the birthday extravaganza promises “a seldom seen yet highly requested MEP number,” the fundraiser extraordinaire says, a big draw is Pandora Boxx (second photo), a coup even for the magic Pitts is known for pulling out of her hat. You may remember Pandora as the natural comic known for crazy costumes and a spot-on Carol Channing impersonation on “Drag Race,” but there’s more to love.

“She’s hysterical and will surprise people with her numbers,” Pitts says. “I’ve worked with Fenuxe Magazine to organize a great event, and our team was looking for a well known entertainer who was comedic and would be willing to donate her tips to the cause.”

Like last year’s MEP 20th Anniversary Celebration (view photos) and Frank Dandy Underwear Show (photos), the event falls on another big summer weekend for nightlife in gay Atlanta, but keep the birthday party in your schedule to give as good as you get, Pitts says.

“Its an opportunity for people to see a great show but more importantly to give back to the community,” she says. “If you care about Mary Edith, then you know how important this annual event is to me.”

We’ve seen less of Mary Edith since her 11-year gig at Burkhart’s abruptly ended in December. She adds her brand of drag to the weekly Wednesday Mary Edith’s Music Mashup game at Joe’s on Juniper, and be still hearts of Mary Edith fans, there’s an even bigger regular gig in the works.

“I have thoroughly enjoyed the time off, but I’m excited about my next step,” she tells us. “As soon as I can make an announcement, you know I will!”

We’ll hold her to it.

Until then, Saturday’s show is sure to satisfy that nagging itch for more Mary, mary. Buy $10 advance tickets online or at Boy Next Door to save $5 over the cover charge at the door.