In a series of articles on gay Atlanta that highlights gayborhoods, I wasn’t surprised to find Midtown, Little Five Points and East Atlanta. But North Druid Hills? Apparently I’m in the gayborhood. 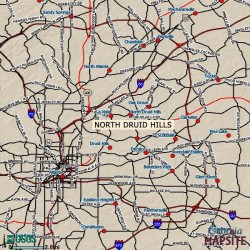 That this week’s four-part series by Examiner columnist Gregory Kelley opens with North Druid Hills is of particular interest to me since that’s where I live. The “Project Q Atlanta North Office,” as we affectionately call it, is less than a half-mile from Briarcliff at LaVista.

I’m in the gayborhood! Or am I? After living in and covering gay life in Atlanta for 10 years, I’ve never heard my area mentioned as one of the residential hotspots, and I question my own experience now. Gladly.

I have met gay people precisely twice while roaming about my ‘hood in the last six years. One was at Starbucks, and she actually lives in Kirkwood. The male couple that lived four streets away and walked their dog past my house on weekends moved to East Atlanta.

A wise man once said “Go to the place where all roads lead.”

A relationship starts with finding people of commonality. In Atlanta there are four areas that lead to the gay promise land and all this week we will cover them.

North Druid Hills also known as “Briarcliff” is a peaceful and accepting suburb of Atlanta’s Metro area. It is a short fifteen minute drive up I-85north from just about anywhere downtown.

This area has a strong Jewish and gay community made up of several residential and commercial properties. The main roads to look for are Briarcliff, Lavista, and North Druid Hills of course. …

However you slice it one of the destinations that all gay roads lead to is not Rome. It is North Druid Hills.

Kelley goes on to argue that the large Park at Briarcliff apartment complex, the convenience of Toco Hills, the frequency of public transit, and a nearby Target make it gay. I love it here, and it’s convenient to anywhere I want to go, but gay is the last thing I would have called it.

The large Jewish population Kelley mentions is more visible. I swap gossip, dog raising tips and mail with Jewish neighbors on either side of my house, and three families directly across the street walk to the gigantic Orthodox temple Beth Jacob each week. A rabbi runs the Toco Hills Kroger, which has a massive section devoted to kosher foods. Kids from Torah Day School Academy sell me fundraising cookies twice a year.

But where are my gays? {encode=”[email protected]” title=” Hit me up by e-mail”}. Let’s have coffee near home, and you can introduce me to the gayborhood.

And where are your gays? Let us know the un-hearlded gayborhood where you’d like to meet your gay neighbors in the comments section below.