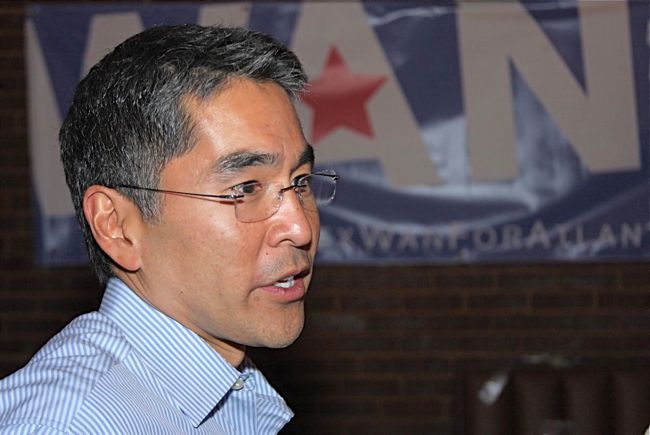 Alex Wan, defeated in his attempt to rid Cheshire Bridge Road of its strippers, isn't quite done complaining about them. This time, he's dissing a legal settlement that kept a gay strip club open and netted the city $90,000.

Wan took his shot at Bliss in an email to constituents on Thursday, two days after he asked supporters for their time and money to support his campaign to win a second term on the Atlanta City Council. And three months after Wan lost his fight to force the club and some sex shops from Cheshire Bridge with a controversial rezoning proposal.

Council had no involvement with or approval authority on the settlement.  City attorneys have briefed me regarding their decision to settle the case, and unfortunately, much of that information is privileged and cannot be shared with the community.  However, please know that I am extremely disappointed in the outcome and will stand with the District in fully prosecuting all future violations of the City's alcohol code.

In July, the city settled a lawsuit Bliss filed over a 2009 police raid that cited it for flouting city regulations that dancers have permits. Eventually, the city hauled the bar before its License Review Board and the bar complained in the lawsuit that it was targeted over anti-gay bias. Trouble with that argument: At the time of the raid, the bar offered female strippers and a straight male crowd.

Bliss sued in 2011 and, lacking any proof of anti-gay bias in its licensing troubles, settled with the city two years later. It cost the bar $75,000 in fines and $15,000 to cover the city's legal bills. The settlement for that bar raid netted the city cash, unlike the one in 2009 that cost the city millions — a settlement Wan (and the City Council) approved.

Can't we all just enjoy a lap dance together and get along?