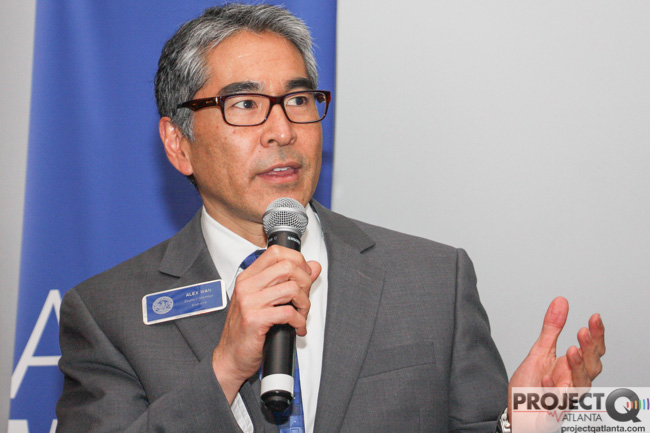 Alex Wan – in the thick of a campaign to become the first gay man and Asian American elected president of the Atlanta City Council – rallied LGBT supporters on Wednesday during an upscale fundraiser in Buckhead.

The LGBTQ Community Fundraiser helped Wan lean into a constituency that’s likely to prove critical to his campaign. Wan – twice elected to the District 6 post on City Council – announced in January that he’s running for the second-highest election position in Atlanta government.

Tony Conway’s gay-owned Legendary Events hosted the fundraiser at the company’s newest event space Flourish on Maple Drive in Buckhead. Conway – who has dabbled with reality TV and “The Real Housewives of Atlanta – has supported Wan’s campaigns in the past. Attendees included Kirk Rich, a gay real estate agent running to replace Wan in the District 6 post.

Wan’s campaign said it had raised $85,704.59 by the end of January, according to campaign financial disclosure statements. That fundraising total places him in the middle of the three City Council members seeking the president’s post. C.T. Martin collected $89,701 and Felicia Moore has raised $21,034.

Earlier this month, Wan received a boost from the Victory Fund, which endorsed his campaign. The Washington, D.C.-based group helps elected LGBT officials across the country.

“We were proud to endorse Alex in 2009 and 2013, and are thrilled to endorse him again today,” Victory Fund President & CEO Aisha Moodie-Mills said in a prepared statement. “Alex has been a staunch and vocal supporter of the District’s diverse neighborhoods, and embraced his role on the City Council with an admirable collaborative leadership style. His service and leadership during a time of great political change for LGBT people is critical – and Atlanta will be a better city with Alex leading the City Council.”