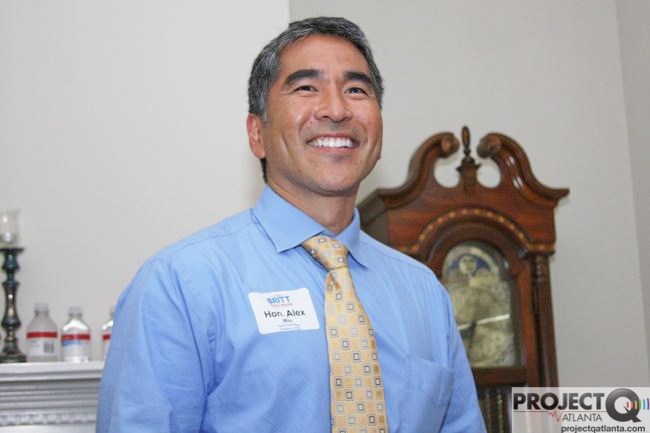 Alex Wan made history when he was elected as the first gay man and Asian American on the Atlanta City Council. Now, he hopes to do it again – this time as City Council president.

Wan announced his bid for the office – the second-highest elected position in Atlanta government – on Wednesday. Wan said it’s time for him to take what he’s learned during his seven years in public office and use it to help guide the City Council – and city – toward a more progressive, innovative future.

“It is time for the city to embrace new modern day progressive concepts like innovation and sustainability, and just more collaborative political leadership and political operations,” Wan said in an interview with Project Q Atlanta.

“With the new administration, I just see potential for some real change and kind of resetting the way the city operates and the way that city politics work. I think there is a real important need for both stability and steadiness as we head into a new younger council and new administration,” Wan said.

For three years, Wan chaired the council’s Finance/Executive Committee, which handles the city budget, as well the Zoning Committee. This year, Wan will head the Utilities Committee. That experience with the city’s $607 million annual budget will help him as council president, he said.

“It’s nice to be able to guide and lead the committees and my colleagues and try and frame some conversations we need to have along with the general needs of the city,” Wan said. “The last three years in terms of our budget process have been the smoothest since I was on council. That’s also a function of doing the work along the way rather than waiting for the budget process – let’s start in advance and know our priorities.”

But in running for council president, Wan will give up the District 6 post he’s held since 2010 – and a seat occupied by an LGBT person for 20 years. Cathy Woolard ousted an incumbent in 1997 and became the state’s first openly LGBT elected official. Anne Fauver replaced her in 2002 when Woolard became the city’s first-ever gay City Council president.

Wan said Woolard blazed a new trail in District 6 but that residents there want an effective council member as much as progressive points for electing LGBT candidates.

“In this day and age in Atlanta, especially with my experience in the district seat, people want to see the work get done and they want the person in there to do it. They don’t care if you are green or purple or Alex. Thanks to folks like Cathy and Anne Fauver, [being LGBT] has become a non-issue,” Wan said.

But with the city’s Asian population at less than five percent, Wan added, his election as council president would be a big moment on that front. 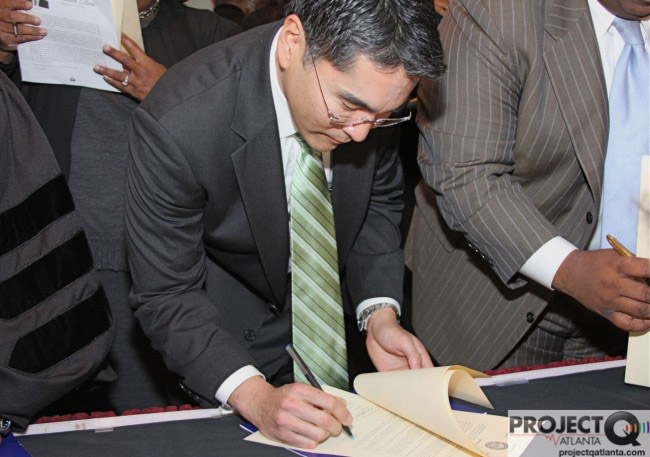 ‘I’m more interested in a solution than saber rattling’

Wan took office in January 2010 (second photo) and what an interesting ride it has been. He helped convince the council to back gay marriage and oppose anti-LGBT legislation, stood with Mayor Kasim Reed when he fired Fire Chief Kelvin Cochran over his anti-gay and misogynistic book, persuaded colleagues to ban smoking in city parks and allow city voters to decide whether to allow retail sales of beer and wine on Sundays. Wan also helped the city fix its gender identity issues – twice.

On occasion, Wan also bucked Reed – much to the mayor’s irritation.

“I’m more interested in finding a solution than I am about saber rattling and fighting for the sake of fighting,” he added.

In 2013, as Wan entered the final year of his first term, he hit a speed bump when he tried to push sexually oriented businesses off Cheshire Bridge Road. The effort split LGBT residents and led to a bitter, months-long fight that Wan ultimately lost.

But his effort to neuter Cheshire Bridge didn’t impact his re-election to a second term. Wan won 76 percent of the vote on his way to trouncing two opponents just months after the Cheshire Bridge fight. That very public battle, though, taught Wan an important lesson that’s helped his council work since, he said.

“When you are first in office, you are very idealistic and somewhat bold and brazen and you were elected and you’re empowered to go make all of these radical changes. What I gained from that is a better ability and capacity to listen and to hear folks’ concerns, to weigh priorities, weigh interests, and weigh strategies and tactics,” Wan said.

“I also learned that you’ve got to do a better of talking with folks and explaining, helping them understand where you’re coming from and your motivations for doing something – this applies to any political initiative – so that they get a chance to voice their concerns and opinions in a collaborative and constructive way. Had I fostered a broader conversation about that, I think the approach would have been a lot different,” he added. 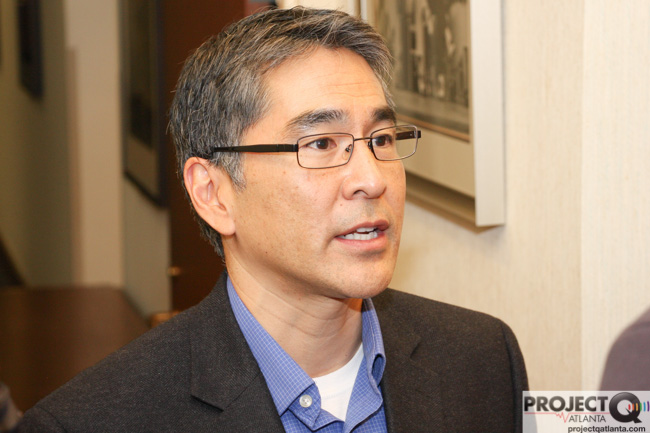 Wan came into office as the city struggled with the aftermath of the police raid of the Eagle in September 2009. The raid led to federal lawsuits, millions of dollars in legal settlements and reform to the Atlanta Police Department. Wan gives the agency credit for its work to improve relations with the city’s LGBT residents.

“I do think they’ve made a lot of progress,” Wan said. “To the extent that APD can be as prepared and receptive to improvement, the better. With the new chief, I feel good that we’ll continue to see that posture from them of being willing to hear ways to improve things like training, recruitment and discipline.”

With the council president’s race, Wan faces the challenge of introducing himself to city residents beyond the roughly 35,000 he has represented for seven years.

“District 6 is pretty consistent and constant in terms of its priorities and its approach to challenges and problems. That obviously changes when you talk citywide,” Wan said.

Wan, the 49-year-old development director for Emory Libraries, said meeting people across the city of nearly 450,000 people will take time – and a hefty amount of fundraising. Voters will decide the race Nov. 7.

“I’m going in with the approach that outside of District 6, no one knows me. That’s my work for the next 11 months. I’ve got to go introduce myself, listen to what folks care about and hope that they see me as the best one to facilitate solutions to those concerns. That’s where the time factor comes in,” Wan said.