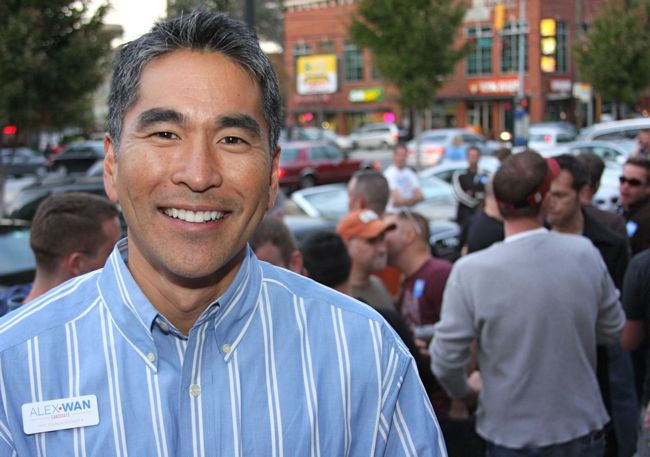 “Alex Wan is not our candidate. We are business owners and we have a voice, too,” he told the GA Voice on June 4.

Morrison said he and other Cheshire Bridge business owners targeted by Wan’s proposed legislation have been talking about backing a candidate to oppose Wan for some time and continued the conversation late into the night after the council vote.

“We’re a permanent part of the landscape,” Morrison said of adult businesses. “He was able to take his personal views and push forward this legislation — that is not going to happen in this election.”

Morrison owns Inserection, the sex shop and gloryhole den on Cheshire Bridge that was one of several sexually-oriented businesses targeted by Wan. On Monday, the Atlanta City Council voted down Wan's rezoning proposals.

Morrison has long been a champion of sexual liberation and fought city officials for years over his stores and the sex supplies they sold. Creative Loafing offered a refresher on his colorful background.

Michael Morrison is well-acquainted with trouble. His first obscenity arrest came shortly before his graduation from Oglethorpe University in 1995. The previous January, the California transplant opened his first “adult toy store,” 9 1/2 Weeks, on West Peachtree Street in Midtown near a site the city had earmarked for a children's museum.

Morrison recalls that each time he would open a new store in Atlanta, police would make a show of busting it. Then he would give interviews vowing not to knuckle under to someone else's version of morality.

“You don't start in this business planning to be a crusader for First Amendment rights,” he says. But Morrison, now 34 and a second-generation sex-toy retailer, found that, to stay in business, he had to take on that role.

Before his efforts to neuter Cheshire Bridge, Wan appeared in line to cruise to an easy re-election to a second term as the council's only openly gay member. He bested a crowded field in 2009 to win the open District 6 seat and did so with strong support from LGBT voters and financial backers.

Wan, defiant in the face of LGBT criticism of Cheshire Bridge plan, struck a softer tone this week in the face of the council vote and possible challenger. Sort of.

“This effort was never meant to anger the LGBT community, and I recognize that it did with some. I absolutely appreciate the history the community shares with Cheshire Bridge, which is why I made sure any strategy would not negatively impact the bars and clubs — either in this corridor or elsewhere,” Wan said.

“I am sorry if folks feel my targeting the adult businesses has undone all of the community work that I have done for the overall LGBT movement.”