Alex Wan and his his coupon-clipping zeal 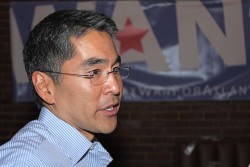 We know a lot about Alex Wan. He’s an engineer. He’s a politician. He’s partnered with a guy named Hot Gay Joe. And he’s cheap. A miser. A spendthrift. Say it ain’t so, Alex!

Wan, the newly minted rep for District 6 on the Atlanta City Council, also knows a thing or two about clipping coupons, so says a recent profile in the AJC’s “Atlanta Bargain Hunter.”

He’s so adept at finding a food bargain, in fact, that he scored $1,874 in savings while spending $3,274 on groceries last year and that came as he was in a six-way race for the City Council seat that had the added pleasure of a run-off. Now that’s impressive.

Too bad that he turned around and spent it on an overseas trip with friends. Well, he is a gay coupon-clipper.

Wan, 42, said he was bitten with the frugal bug years ago. What started as a game turned into something more serious when he saw the bottom line. He applied the same principles he used as an engineer to make himself a successful coupon clipper.

“It’s all about efficiency. I guess that’s the industrial engineer in me,” he said. “I always ask if there is a better way or more efficient way to do something. When I quantify it and see how much impact it can have, it’s a motivator.”

But if you’re looking to brunch with the first-term city council member, don’t schedule it on a Sunday. That’s his coupon clipping time.

Friends know not to disturb him on a Sunday morning. It’s when he reads the Sunday newspaper, drinks coffee and goes to work mixing and matching sales with coupons. He doesn’t mind postponing a purchase until it makes more sense financially to buy it. And when he and friends take trips, they hand the shopping list to Wan.