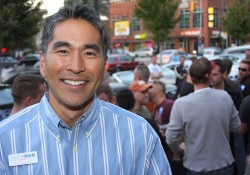 Alex Wan, who vanquished a handful of rivals last year to become the only openly gay member of the Atlanta City Council, now faces the reality of governing and a grumpy press irked by a recent council vote.

In other words, he’s found himself in the first sticky wicket of his term.

Wan is being criticized by the Atlanta Progressive News for his apparent refusal to say how he voted when the council considered a proposal limiting public comment at committee meetings. The vote came during a retreat in February and APN has recently pushed the 15-member council to state publicly how they voted on the proposal, which eventually was sidelined. Six council members haven’t responded; Wan is one of at least two who refuse to state how they voted.

City Council Member Alex Wan (District 6) may have campaigned for office on a platform of transparency and accountability, but he is now openly refusing to disclose how he voted at the Council Retreat in February 2010 and wants to know whether the law department feels comfortable spending taxpayer dollars to defend his perceived right to a secret vote.

When Wan announced his candidacy for Council in a press release dated May 26, 2009, he promised to bring “accountability and transparency” to City Council.

However, Wan refused to be transparent or accountable for how he voted in an email to the City’s law department today, a copy of which was obtained by Atlanta Progressive News.

The media outlet also argues that the breakdown of the vote should be made public under the Georgia Open Meetings Act. They plan to file a lawsuit over the matter. Wan, according to APN, has sought backing from the city’s law department for his stand and says APN is bullying him.

“I have no intentions of answering his question [APN’s question regarding how Wan voted]. I don’t appreciate this manner of bullying over a matter I believe he [APN’s editor] will have little or no grounds for any lawsuit. I base much of that on the written opinion you provided to Councilmember Moore… about this matter,” Wan wrote.

“That said, I wanted to make sure that as our counsel, you’re comfortable with my position and that if he does end up filing the lawsuit as threatened that the City is prepared to defend me and any other Councilmembers that choose not to submit to his tactics,” Wan wrote.

The reporter who wrote the story, APN News Editor Matthew Cardinale, is also gay and no stranger to offering comments at City Council committee meetings. It’s an issue he feels so strongly that he rapped — as well as a white guy can — about the issue during a council meeting in February.