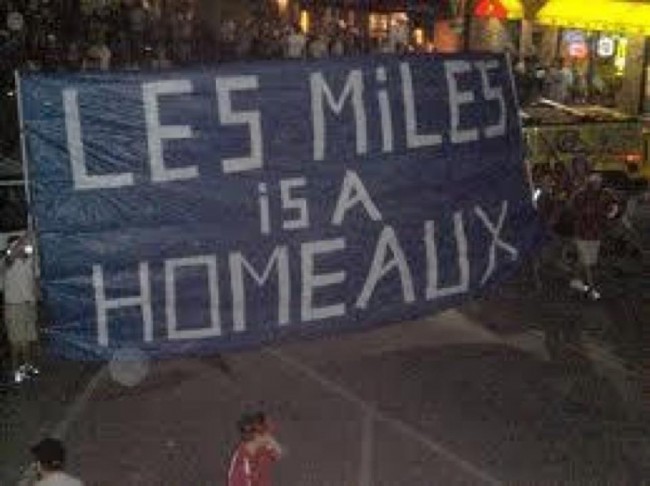 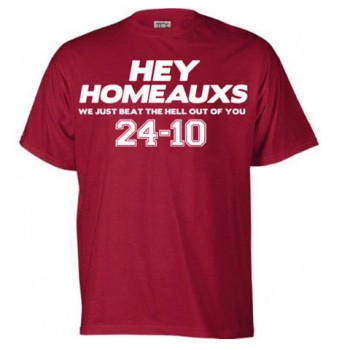 A little wishful thinking by an overzealous Alabama Crimson Tide fan went anti-gay astray when a t-shirt they were selling was knocked for its celebration of gay bashing. Last November, four days before LSU squeaked out a 9-6 win over Bama on Nov. 5, Chris Ivey created a website called Hey Homeauxs. Leading up the Alabama-LSU national championship game on Monday, he offered a t-shirt emblazoned with this slogan: “Hey Homeauxs. We Just Beat The Hell Out Of You.” The shirts play on LSU’s French heritage and, critics say, offer an abbreviation of homosexual that celebrates gay bashing. On Wednesday, the site hosted by Go Daddy was abruptly taken down just hours after a tipster alerted Towleroad, which published a brief item about 9 a.m.

I wanted to let you guys know about this website that is selling t-shirts for the Alabama-LSU national championship game on January 9, 2012. The shirts are a play on the French language's heritage in Louisiana. As a resident of Alabama and a lifelong Crimson Tide fan, I am highly offended at this hateful display of 'sportsmanship' by fans of the University.

The shirts have been met with a steady trickle of criticism from Facebook users. "It's 2011 -- gay bashing is no longer considered in good fun," one user writes. "And what's worse -- this isn't even clever -- it's 7th grade 'humor.' Actually, that's an insult to 7th graders."

By noon, the site disappeared with registration information saying only that it was deleted by the client. The slogan seems to date back to at least 2007, when dueling Facebook pages were created. Alabama Fans are Homeauxs was created in response to Les Miles is a Homoeaux, a page that mocked the current LSU coach but has since been deleted. “Les Miles is a Homoeaux” was also used on signs to taunt the coach (photo). The BCS Championship is set for Monday at 8:30 p.m. in New Orleans.