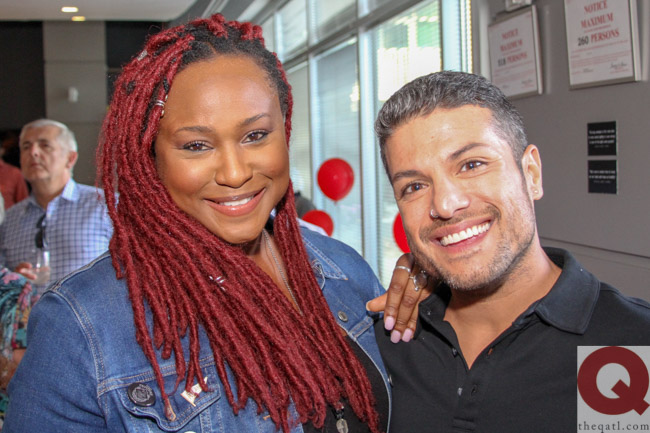 The event, held in the clubroom of the swanky Metropolis condo tower in Midtown, was a warm-up to the main event, which takes place Sunday in Piedmont Park.

Helton (top photo right), who finished in the Top 5 during the first season of “American Idol” in 2002, is a longtime supporter of the Atlanta walk. He joined opening ceremonies in 2013 and 2014 and on Thursday, discussed how being HIV-positive has impacted him. Searles (top photo left) has twice competed on “The Voice,” most recently earlier this year.

Officials with the walk, which has a goal of raising $750,000 this year, announced during Thursday’s event that fundraising had already topped $600,000. Donations can be made through Oct. 31.

Ambassadors for the event include musician and drag queen Taylor Alxndr and youth advocate and social justice activist Masonia Traylor. Taking part in the event is personal for both, they said. AIDS Walk participants will include Shannon Bradley and Cindy Rhodes, who have taken part in more than 40 walks between them.