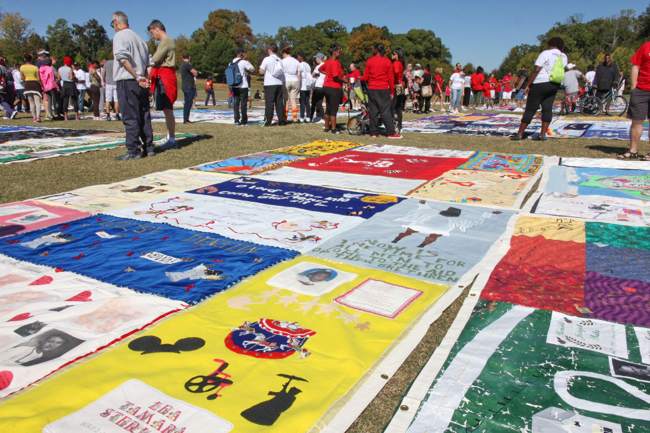 They ran. They walked. They pushed baby strollers. They hugged and held hands. Thousands of people flooded Piedmont Park to help raise what organizers hope will be nearly $1 million during the 22nd Annual AIDS Walk Atlanta 5K & Run on Sunday.

The speedy ones dashed away from the 10th Street starting line as part of the event’s 5K run after Officer Brian Sharp, one of the LGBT liaisons for Atlanta Police, sang the national anthem. Some 785 people completed the 3.1-mile race. The fastest? For at least the third consecutive year that honor went to Genesis Henderson, who at a year older is showing signs of slowing down. The 21-year-old notched a time of 16 minutes, 32 seconds. That’s nine seconds slower than his 2011 time.

The slowest? That went to Laquesha Decosta, who finally wrapped things up after 57 minutes, 2 seconds. Girl, just get to that finish line when you can.

Thousands more took part in the walk, all in an effort to raise funds for eight HIV non-profits, including event organizer AID Atlanta. A total amount raised has not yet been released, though a running tally on the event’s website shows that more than $707,000 has been raised. AID Atlanta called Sunday’s event a success.

Thanks to all the walkers, runners, volunteers, staff, media, sponsors, spokespeople, contributors and everyone involved in making AIDS Walk Atlanta & 5K Run a success this year. We could not do it without each and everyone of you.