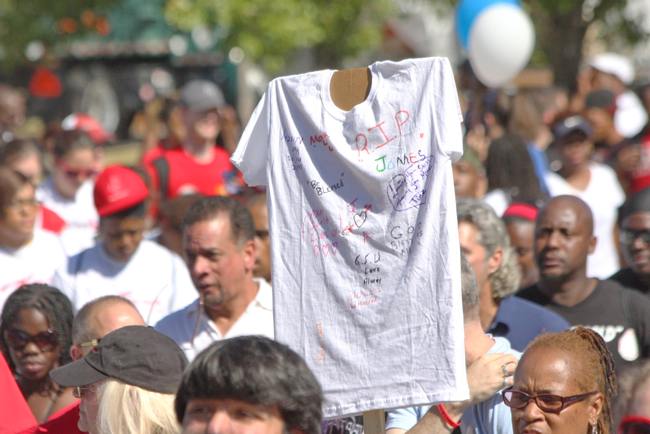 More than 8,000 people registered to help AID Atlanta and nine other HIV agencies raise funds during the 21st Annual AIDS Walk Atlanta & 5K Run on Sunday, filling Piedmont Park with an emotional reminder of the toll that HIV still has on the region’s LGBT residents.

Organizers hope the event raises nearly $1 million for the 10 AIDS service providers and surpasses last year’s fundraising total of $925,000. A running tally on the event’s website shows more than $728,000 raised, though contributions will be accepted through the end of November.

Despite that fundraising gulf, organizers on Sunday ticked off some impressive numbers: More than 8,000 registered walkers, including 250 virtual ones that couldn’t make the event; nearly 1,400 participants in the 5K run; some 550 teams for the walk; and a crew of more than 1,200 volunteers helping to stitch the day together.

“Hope is what we’ve built over 20 years with these walks,” Tracy Elliott (second photo), executive director of event organizer AID Atlanta, told the crowd. “We believe that every single life in Atlanta, in Georgia and on this planet deserves hope. And many who are affected by HIV and AIDS sorely lack this hope. They feel defeated, they feel alone, they feel like their lives have hit their end. Are we going to stand for our neighbors feeling like that Atlanta?”

Elliott said that more than 500,000 people have been helped by the money raised at AIDS Walk Atlanta since its inception. Other beneficiaries include AID Gwinnett, AIDS Alliance for Faith & Health, AIDS Research Consortium of Atlanta, Aniz, Home But Not Alone, Jerusalem House, Living Room, Open Hand and Positive Impact.

Besides Elliott, the event’s opening ceremonies included an emotional speech from Bobbie Bentley (third photo), an HIV-positive woman and mother who was selected earlier this year as the walk’s spokesperson.

“AIDS doesn’t affect sinners or saints. AIDS affects everyone, even the girl next door,” Bentley said. “These organizations are run by real people who help others who need the extra help. People who have no one else.”

Before the opening ceremonies, walk organizers toasted their VIP participants during brunch and a record-setting 1,377 runners laced up for the 5K run. Sunday’s event also included a display of panels from the AIDS Memorial Quilt (bottom photo). Instructors from American Bootcamp warmed up the walkers before they hit the streets (fifth photo). 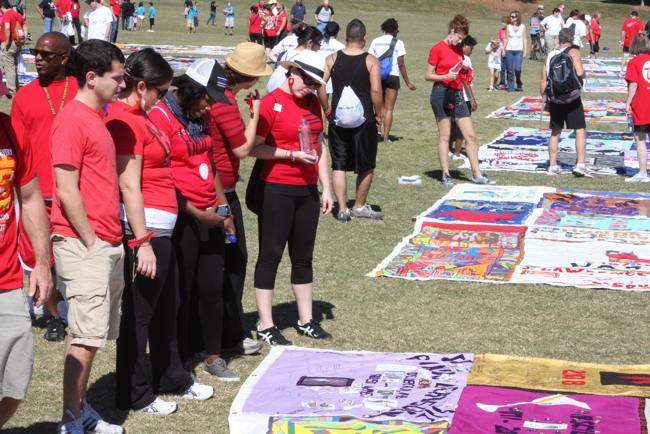