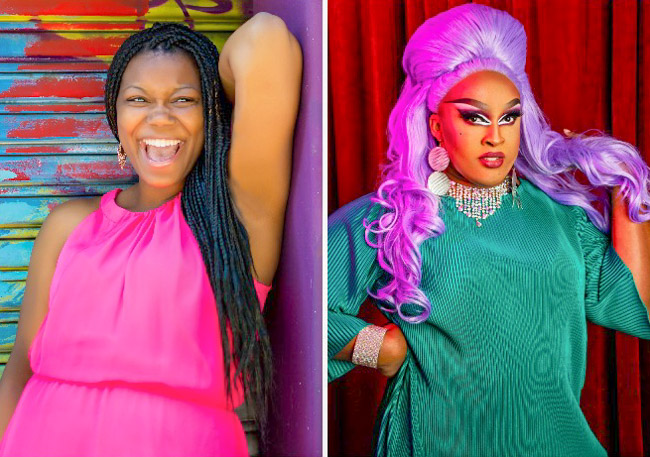 When thousands of people descend on Piedmont Park for the AIDS Walk Atlanta & Music Festival on Sept. 29, they’ll be championed by two local activists chosen as the event’s official ambassadors.

Musician, drag queen and community organizer Taylor Alxndr will be joined by youth advocate and social justice activist Masonia Traylor in the roles. Actor Daniel Franzese (“Looking,” “Mean Girls”) will also be on hand as an ambassador for the event.

It’s personal for Traylor (photo left), who has lived with HIV since 2010. She walks for other people living with HIV and those who have succumbed to it.

“At the time I got diagnosed with HIV, I had a friend from high school pass away from complications of it, and I felt like if he knew that I was HIV-positive as well that he would still be living today,” she told Project Q Atlanta. “He wouldn’t have felt alone. He wouldn’t have felt like just because he was gay that HIV was his demise.”

Traylor has experience serving as an ambassador. She’s played that role for the Centers for Disease Control & Prevention’s “Stop HIV Together” campaign and the Kaiser Family Foundation’s “Greater Than AIDS” campaign.

As an ambassador for AIDS Walk Atlanta, Traylor said she’ll promote the event, encourage people to sign up and raise money, show support to the teams and “help them realize their why.” That work ties into the theme of this year’s event: #whyiwalk.

Traylor also walks for her two children, one of whom she had after her diagnosis. She wants that daughter to realize she is “privileged” to not have HIV.

“I think that the fear can be done away with if more people would raise their voice about their diagnosis and take a stand against someone who criticizes those with HIV, because it could happen to them too,” she said.

Traylor said she will be a part of the AIDS Walk until there’s a cure.

Alxndr has taken part in the AIDS Walk since 2012. The event’s organizers reached out to them earlier this year about being an ambassador.

“I think I was reached out to because of my work in the community, and always involving some form of HIV awareness in whatever I do, whether it’s putting on a ball where we focus on HIV awareness or making sure there’s testing and resources at every major event I have,” they said.

Being an ambassador for the AIDS Walk “means a lot” to Alxndr.

“I said yes because I do believe in the mission and the goal of AIDS Walk Atlanta, especially in this time when we’re talking about HIV criminalization laws and PrEP access,” they told Project Q. “The conversation needs to keep going. I said yeah, I’d totally love to be an ambassador.”