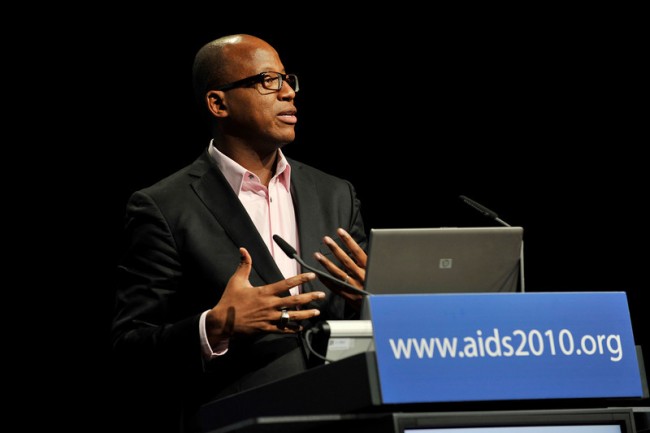 Between walking with thousands, pimping some bachelors and dressing up some debs, there’s a force of volunteers, advocates and businesses that make AID Atlanta tick and allow it to meet the needs of people with HIV. On Thursday, the non-profit honors them.

The organization will toast its friends and supporters – and its 30th anniversary – with AID Atlanta Honors, an upscale event at the Temple in Midtown.

“As AID Atlanta celebrates the milestone of our 30th anniversary, it is important that we also celebrate those that have had a tremendous impact on the organization and our mission,” Executive Director Tracy Elliott says in a prepared statement.

The event will offer four honors, including one to Kevin Fenton (photo), an Atlantan and chief of the Centers for Disease Control & Prevention’s HIV efforts. You know, the guy who tells you to get an HIV test and to stop being a slut.

National Honors: Kevin Fenton, M.D., Ph.D., the Director of the National Center for HIV/AIDS, Viral Hepatitis, STD, and TB Prevention at the U.S. Centers for Disease Control and Prevention, has consistently focused on addressing racial and ethnic disparities in sexual health.

Georgia Honors: The Founders of AID Atlanta — Peter Aliberti, Brian Clark, and Mary Jenks and posthumously to Grahm Bruton and Neal Walker – the group of friends who got together 30 years ago to raise money for friends who were facing the then-unidentified illness and provided the first AID Atlanta services.

Community Honors: The employees of Gap, Inc. have been partners with AID Atlanta for more than five years, and have donated funds, time and volunteer services to Payback the Park Earth Day Celebration and AIDS Walk Atlanta & 5K Run.

Corporate Honors: AutoTrader.com has been an exceptional partner to AID Atlanta through its work with AIDS Walk Atlanta & 5K Run, raising over $13,000 last year as a Gold Team and as a Grand Sponsor at the $10,000 level.

Kenneth F. Britt Service Honors: Tom Roeck, an integral member of AID Atlanta’s Board of Directors since 1996 whose leadership, passion, dedication and oversight as Treasurer of the Board since 2009 has facilitated strategic planning regarding the short- and long-term financial vitality of the organization.

Tickets are still available for the event.