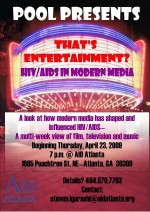 There’s no doubt the media impacts our lives every day. “Will & Grace” and “Sex & the City” anyone?

That impact is the theme of a discussion Thursday from AID Atlanta’s outreach efforts for gay men. “That’s Entertainment? HIV/AIDS in Modern Media” will explore the history of LGBT characters on television, how HIV/AIDS is addressed on the small screen and how that impacts personal views on the disease.

The session is part of AID Atlanta’s series called Prominent Outgoing Opinion Leaders, or POOL, which is a grassroots effort to enlist and train key opinion leaders to encourage safer sex behaviors among their social networks. Discussions on film and music will follow in May and June.

The event is open to everyone, though it’s focused on gay and bisexual men. It takes place at AID Atlanta’s office, 1605 Peachtree St. NE, 7 p.m.