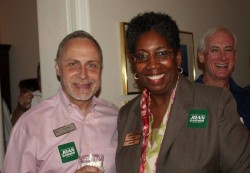 Someone never bothered to tell AID Atlanta that Cinco de Mayo is an excuse to be festive, not so serious. But the non-profit didn’t get the message and spent the Mexican holiday raising bucks. Big bucks.

The organization feted its supporters and major donors on Wednesday during its Celebrate Cinco de Mayo with AID Atlanta LOOP event. In the process, the group raised more than $12,000. Not bad for a day known more for its tequila-fueled hangovers, not supporting needy causes.

The evening, held in a private residence in Ansley Park, also attracted two state lawmakers — gay-friendly Republican Mike Jacobs and progressive Democrat Margaret Kaiser. Jacobs scored a win during the recent Gold Dome session by working to pass an anti-bullying measure that was backed by Georgia Equality and a host of other groups. (The measure now awaits the signature of Gov. Sonny Perdue.) 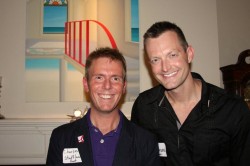 Also at the event were two political candidates: Lesbian and longtime LGBT activist Joan Garner (top photo), who is campaigning for an open spot on the Fulton County Commission, and Graham Balch, who is hoping to unseat one of the legislature’s most pro-gay allies, Sen Vincent Fort.

The event was designed for members of AID Atlanta’s LOOP, which is the agency’s program for donors who contribute more than $1,200 a year.