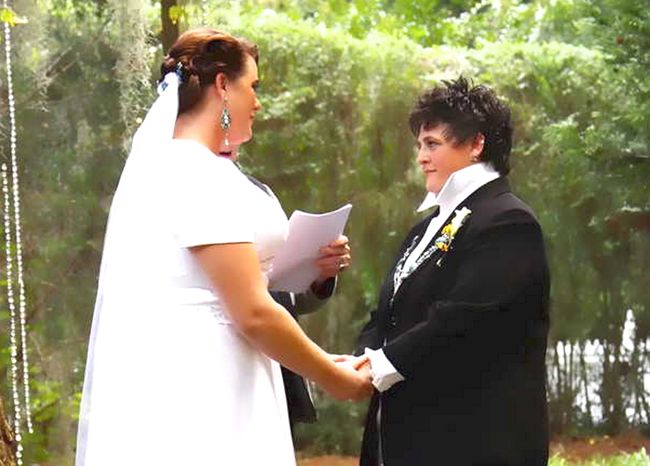 There's a gay marriage explosion going on in one Georgia city and a notoriously not gay-friendly insurance giant is lending a helping hand. Quack on that.

On Saturday, the Ledger-Enquirer explored the banishment of gay marriage in Georgia -- you  know, something about a pair of Supreme Court decisions -- and what they found in Columbus was lots of gay couples getting hitched. In states other than Georgia.

But better than that, they also unearthed this little nugget of LGBT progress: Some 26 same-sex couples, 15 in Columbus, receive health benefits from AFLAC. First, 15 gay couples doing anything in this west Georgia city is big news. But it's even bigger when it involves the Columbus-based insurance giant, which is No. 125 on the Forbes 1000.

Here's why: AFLAC routinely ignores the annual Corporate Equality Index from the Human Rights Campaign, which ranks companies on LGBT workplace policies, and is routinely among Georgia companies who flunk it. They received a 30 in the 2013 edition.

But now it appears that the company may not be as anti-gay as their HRC score would indicate.

In response to questions from the Ledger-Enquirer, Aflac issued a statement Friday, explaining their insurance benefits policy for same-sex couples. It said: "Aflac has historically provided benefits to anyone with a legal marriage certificate. In keeping with our commitment to embrace and promote diversity, our policy to offer the same benefits to all legally married employees and to domestic partners who have registered their relationships with any state, regardless of orientation, is included in our formal company benefits guide."

The company currently provides benefits to 26 same-sex couples, 15 of whom are in Columbus, the statement said.

The company's score of 30 includes credit for policies banning discrimination based on sexual orientation, gender identity and gender expression. But nothing for offering health benefits to the partners of gay-married employees or their domestic partners.

So there you go. Gay-married couples in Columbus. And AFLAC gives some of them health benefits. Too bad you've got to marry out of state to get them.