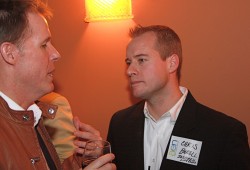 Sometimes we just need a kick in the ass to get our life in order. So it was the case on Thursday when life coach Christopher Burell joined the Atlanta Executive Network to tell us how to stop making excuses and really get stuff done.

We’ve been a fan of Burell (top photo right) since he and his partner flipped a house and were featured in an episode of TLC’s “Property Ladder.” But the session last night, which came as part of the gay business group’s monthly networking group, pulled from his work as a life coach. You know, the kind of stuff that gets you over the plateau, motivated at work and able to master the daily responsibilities that leave you feeling a touch overwhelmed. 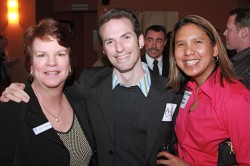 Burell provided a nice follow to Hot Gay Joe, who at last month’s AEN event provided tools for discovering Atlanta with your iPhone and enhancing both your AEN experience and your life in general.

Next up for AEN: March Madness on March 25 when the group partners with the Atlanta Gay & Lesbian Chamber of Commerce to offer guidance on how to promote yourself in two minutes.