Adele, because ‘Brokeback’ needed to be sadder

If you haven’t seen “Brokeback Mountain” in a while, a new video using clips from the movie and Adele’s “Someone Like You” should do the cleansing cry-your-eyes-out trick in just under five minutes. 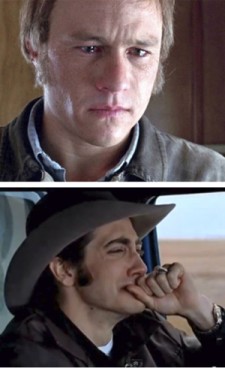 The 2005 film starring Heath Ledger and Jake Gyllenhaal as the lovelorn cowboys won just about every gay heart and a planet full of international awards. With the most Oscar nominations of 2006, “Brokeback” also won three of the Academy’s little gold men, including one for Gustavo Santaolalla’s Best Original Score. Of course, the winning score didn’t include Adele, but watching this video makes us think it could have. It also makes us think we should pull out that DVD and make a gay cowboy day of it, and that you’ll be seeing more of this little wonder by YouTube user Gomnitus, which just came out on Tuesday. The video asks viewers to tweet it using the hashtag #SayNoToHate. Oscar-winning director Ang Lee would probably approve. His speech for the award saluted “not just all the gay men and women whose love is denied by society, but the greatness of love itself.” Oh, "Brokeback," we just can't quit (Someone Like) you. Get out your commemorative cowboy bandana for nose blowing before you press play.