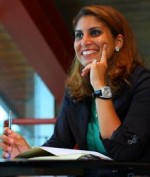 At least Liz Coyle won’t feel like the odd straight woman out in the District 6 race for the Atlanta City Council.

Left without an incumbent, the campaign for the open seat attracted yet another candidate over the weekend: Bahareh Azizi, a scientist at Georgia Tech. Azizi launched her campaign on Saturday, according to Creative Loafing.

For those keeping scores: three gays, two straights now in the race.

According to an emailed press release, Azizi launched her campaign during Saturday’s 40th annual Peachtree Road Race. She says the announcement dovetails with her campaign’s “commitment, endurance and a willingness to join the people of our city on the streets of Atlanta.”

In 2007, she was the co-host of Science Investigators, a PBS pilot show. According to a press release about the show’s first episode, Azizi investigated the disappearance of a certain species of frogs in New York and drove an electric car that went from 0 to 60 mph in three seconds. Wheee!

On her campaign website, Azizi cites safety, community development and education. She also hits on the diversity of the district she wants to lead, which includes the heavily gay area of Midtown as well the Morningside, Druid Hills and Virginia-Highland neighborhoods.

I am proud of the diversity in our district – it is one of our most precious assets, and I will work to foster the growth and strength of diversity. Together we can create a more harmonious environment for people to live, work and play. Ultimately, our home should be a place where we, as residents, have the right to thrive with opportunities, with much prosperity, security, and most importantly with equal rights for all. We are all here united under one banner: We LOVE ATLANTA !

Harmony in District 6? Apparently, she’s never sat through a dispute with gay owners and their Not In My Backyard neighbors, or the transgender hookers that are often the target of zealous neighborhood activists.

Incumbent Anne Fauver, the council’s only openly gay member, has said she won’t seek a third term. Educator Charlie Stadtlander, who is gay, was the the first announced candidate for the post, but dropped out when Brodie announced his campaign.