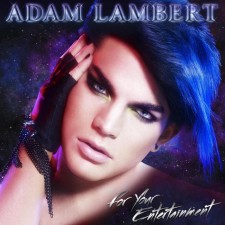 The early reviews are decidedly mixed for the cover of Adam Lambert’s debut CD. Some ask if we’re reliving ‘80s mistakes, but others assert that it’s all that bad that makes it oh-so-good.

Let’s break it down.

One friend of Project Q Atlanta says the cover of “For Your Entertainment” (top photo) is “ridiculous in all the good ways.” We tend to agree, and in many ways, think the result is necessary and expected given Lambert’s, um, skin.

Oh alright, let’s not mince words: We mean his spotty complexion. Admit it, you knew an airbrush artist, Photoshop expert, and an entire lighting crew would be involved.

We love you Adam; we really do.

But decidedly, the gay blog Queerty hates it.

“For Your Entertainment?” It certainly is! Because when we spotted Adam Lambert’s album cover, we burst out laughing. This is what he’s come up with? We love you Adam, but no. NO. NO! It’s Rainbow Bright mixed with mistakes from the 80s. We’re struggling to think that, somehow, down the road, we’ll see this as an “iconic” cover. Check back with us. In a decade.

Let’s stop for a minute, though. We’d like to remind everyone—those who were there the first time and those that are hellbent on reminding us of it–the ‘80s are like, totally back, fer sure. Skinny jeans, hot pink and turquoise, the list assaults us on every drive past Grady High School. So maybe Lambert’s right on time.

Come on, doesn’t the cover remind you of, oh say… Xanadu (bottom photo)? Anyone? Bueller?

Out magazine’s Popnography simply has this to say:

So we’re going to leave it up to you, gentle readers. Love Adam so much you like this cover despite yourself? Or will you never love anyone enough, even without hearing one note of his new album, to forgive this Olivia Newton-John throwback of a glamour shot? Leave us a comment below.

Seriously: All this just for the cover of an album that is still in production? You betcha. “For Your Entertainment” is expected in stores on Nov. 23.