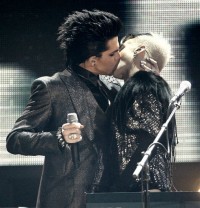 With a new album finally on the streets Monday, the buzz about Adam Lambert is still more about his ability to make headlines. Sunday’s sexually charged American Music Awards performance helps–sell records.

Gay gasps filled the three-hour awards ceremony, and we couldn’t have been more enthralled. Leave it to the AMAs to turn out a gay pop wet dream that’s the hottest topic at Monday water coolers.

It might have been enough that Lady Gaga played a piano that was on fire. We could have gone to bed happy that the iconic Miss Janet rocked an eight-minute medley of some of her biggest hits, that J-Lo packed her performance with the hottest male backup dancers of the night, or that Mary J. Blige knocked it out of the park.

But of all those inspiring moments and several more, Adam Lambert’s routine has to take the cake as the gayest, or at least the most literally homosexual. And you know there’s a difference.

The rendition of his first single, the title track from “For Your Entertainment,” was chock full of more sensual movement, over-the-top glam rock mugging, and mock sexual situations than he ever could have gotten away with on “Idol.”

The song itself is suggestive, and the production played it to the hilt. Lambert indiscriminately cavorted with male and female backups throughout the performance.

Perhaps our favorite moment came when when he walked two hot male dancers across the stage on a leash, but maybe that’s more about us and not about reviewing the performance. Berate us for that later.

Lambert, the singer with more man-on-man kisses caught online than anyone—ever—added another one to the list when he laid one on his keyboard player (photo). But that was just part of what went down.

Speaking of going down, he also pressed a male dancer’s mouth into his crotch and gyrated into his face. Momentary as it was, we let out a small squeal.

Some straight fans are expectedly shocked. Access Atlanta reports that complaints to the Disney-owned ABC are off the charts. “Good Morning America” even canceled Lambert’s appearance over it.

Not even the gay blogosphere is completely happy with the display, either. Queerty runs down all of the video clips with commentary, including this barb for Lambert:

Somehow his first public performance was, uh, worse than anything we ever saw on “Idol.” And while we must admit we liked the “guys on leashes” thing, we can’t help but wonder, How did this go so badly?

But from our perspective, we have to say that ultimately, we were actually impressed. Were the vocals spot-on? Nope. Could we have done without the silly costume? Yep. Is he the Sexiest Man Alive? Eh.

But you go, Adam Lambert, for putting your sexuality on display to a worldwide audience, for having no fear, and for befuddling ABC’s camera coordinator who didn’t know where to pan next.

Most endearingly, thank you for being yourself in the oh-so-expected world of the “Post-‘Idol’ factory.”

Enough opinion. Judge for yourself in this video clip of Lambert’s debut: