Lambert single out, but is he a ‘Single Lady’? 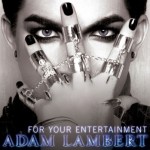 Yes, the title track from “For Your Entertainment” is in stores and online now. We heard it, and while comparisons of the track to classic rockers T-Rex are out there, we have to say that’s a stretch. It’s an awfully glammed up, thoroughly modern take if there are any similarities to be had at all.

Of course, glammed up is exactly how Adam likes things. He wouldn’t have his single, or even Halloween, any other way. Just look at his version of a vampire (middle photo) at an L.A. costume party on Oct. 31.

But who’s the big gay genie in the shot? The blogosphere is clamoring more about multiple Lambert sightings with pop singer Ferras than the song.

But that’s celebrity for you. Sure, give us an album since you’re a singer, but your personal life will always compete for the attention. We’re certainly guilty of mixing reports on his career with musings on his private time.

Ferras: “Spent the afternoon writing with Adam Lambert! Havent seen him since before idol- we’re writing a great song. Its gunna be sick ya’ll. [smiley]”

We especially like reading into that “smiley” face. But neither singer has responded to rumors that they are making out between sessions. JustJared speculates a lot on whether the relationship is platonic or not. We love to dish as much as the next guy, but we admit, no one outside their circle knows the facts.

Who needs facts? OK, well the fact is that the pair is being seen a lot together. And we all know what happens when two 27-year old, almost famous cuties are locked up for a long time. Alright, that’s technically speculation, but is it wishful thinking? 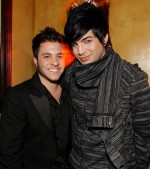 Besides the Halloween party–where Ferras was supposed to be an Arabian Prince, not a genie–the two were also spotted partying at Star Magazine’s anniversary bash (bottom photo), among other, more private meals and walks. Uh-huh.

But the Halloween shindig gets a little more interesting. Ferras’ costume matched that of blogger/pseudo-celebrity Markus Molinari, and they were supposedly at the party together. Compare at least 25 different online shots of Ferras with Lambert at the party to just one with Molinari, taken as they arrived.

Neither looks happy. Just sayin’. Of course, that unhappy photo is at the top of Markus’ blog with no Lambert photos in sight.

And poor Markus. His blog was the first to announce Lambert’s newly found singledom, if it still exists.