Adam Lambert: ‘Chill out… it’s not that deep’ 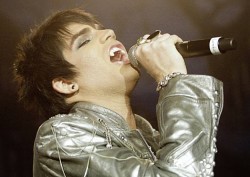 To hear one overly enthusiastic critic and Adam Lambert’s collaborators tell it, the fledgling singer knows who he is and is set to become the next Rock God. Even Lambert can smell the hype.

“I don’t take myself all that seriously,” he tells the San Francisco Chronicle. “People want to talk about whether I have rock cred, whether I’m selling out, the theatricality, the gay stuff. … Chill out! Just enjoy yourself. It’s not that deep.”

Apparently, the critic writing the article couldn’t take the hint. The piece includes ridiculously glowing praise for a singer whose first album hasn’t even been released.

“…as he works to resurrect rock in the new pop age.”

“…Lambert carries forward into one of the most intensely observed major label debuts in recent pop history.”

“His playful sexuality and flamboyance, once qualities common to hard rockers, are now owned by the likes of Pink and Lady Gaga. What separates Lambert from much of pop’s young elite is his voice, an instrument whose power and range recalls titans of hard rock.”

Seriously? Apparently 19 Entertainment, aka “The ‘Idol’ Machine,” is a major label now. If “major” means money to burn, then sure. We’ll allow it. But don’t even go there when it comes to the voices of Pink and Lady Gaga.

And that’s just the beginning; the story goes further and compares Lambert’s impending career to the success of Beyonce and the legends of David Bowie, Mick Jagger, Prince and Michael Jackson. Come on. He can’t be better than everybody in every genre.

The producers and collaborators make Lambert sound like he’s already made it into the Hall of Fame. Producer Rob Cavallo probably takes it the furthest.

“There will be controversy, and there will be opinions. If he stays true to himself, he will be one of those great artists to watch over the years.”

“He can sing almost any note on a guitar from the lowest to highest,” Cavallo says. “And if you’re in the studio with him and say, ‘Can we get a little more dirty?’ he’ll go ‘Waaaaah!’ And then the microphone is melted and the speakers have exploded.”

More than a bit much? Maybe, but at least he’s getting paid to say so. The reviewer goes so far, it’s like she’s on the take, too.

But through the sugary gush, the article does give us some insight into Lambert’s own attitude.

“Sometimes it’s just, ‘This is hot, I feel good, this song makes me want to go get a drink and flirt with somebody and have a good time.’ Good energy is just as credible as the cathartic, dark, heavy shit,” he told the paper. “It’s just as important!”

Over-indulgent critics and industry drones aside, we like Adam’s take. Sometimes, a boy just wants to have fun—for as long as it may or may not last. We’ll take the singer’s own advice: “Chill” and see what happens.

“For Your Entertainment” is set for release Nov. 23.