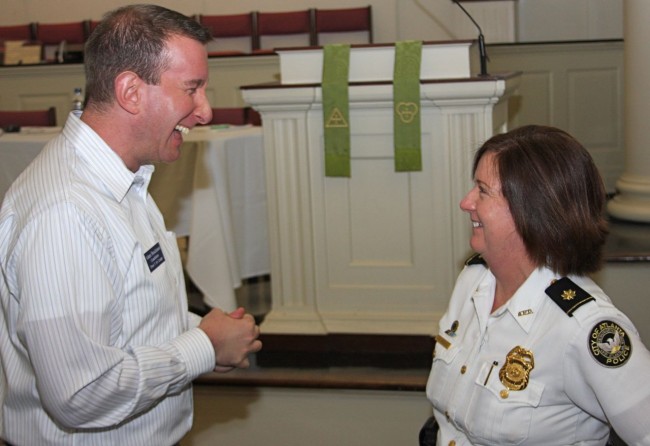 Adam Brackman has run the table with gay endorsements for his Atlanta City Council campaign. The gay candidate’s getting a little love from the non-gay progressives, too.

On Monday, those gay-loving scribes at Creative Loafing said Brackman was their man — not in that way; in the political sense — for the Post 1 At-Large seat.

The fast-talking, openly gay IBM project manager is a genuine grassroots community advocate who knows his neighborhood’s police beat number. He’s served on multiple neighborhood group boards, chaired the Neighborhood Planning Unit-W public safety committee, and created the greenspace advocacy group Friends of Benteen Park. For the last three years, he’s been heavily involved with Fulton County CourtWatch, a district attorney’s office program in which residents are encouraged to attend legal proceedings that involve crimes committed in their neighborhoods. This year, he was named the Best CourtWatcher for his dogged persistence and frequent attendance at trials and sentencings.

Brackman’s running on a platform of improving public safety, spurring financial reform, and making City Hall more efficient and accessible for taxpayers. On public safety, he’s the most experienced of the candidates, boasting four innovative funding solutions that could not only add and retain officers, but also boost morale. That perspective garnered him the police union endorsement. Add an understanding of affordable housing and transportation, and you have a candidate who’s not just running on the issues du jour.

Brackman is running against Dwanda Farmer, Chris Vaughn and Michael Julian Bond, all candidates familiar with courting LGBT voters and issues. But Brackman has run the table in picking up endorsements from gay groups, with Georgia Equality, Atlanta Stonewall Democrats, Georgia Log Cabin Republicans and the Gay & Lesbian Victory Fund all backing his campaign.

Atlanta Progressive News, though, put its progressive weight behind Bond. That’s even after Brackman tells APN in an interview that he favors keeping bars and clubs open past 3 a.m. and beyond the current last call of 2:30 a.m.

Photo: Adam Brackman with Major Rene Propes of the Atlanta Police Department during an Oct. 5 public forum about the recent raid at the Atlanta Eagle.