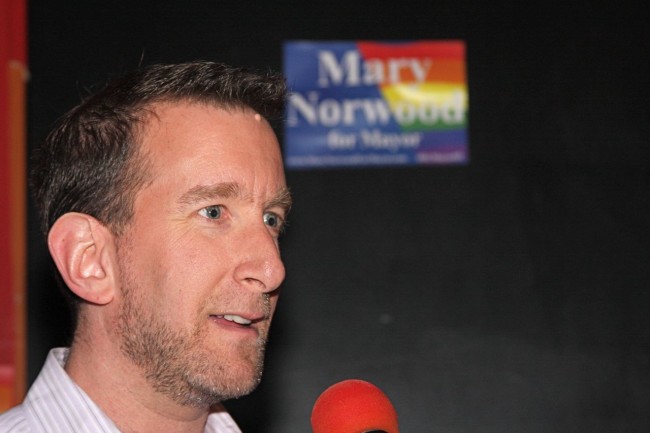 Adam Brackman’s life has settled down since the gay candidate lost Nov. 3 — he even had time for a quick run to Kroger Thursday for last-minute Thanksgiving fixins. But he’s not staying out of politics.

Brackman was one of 15 LGBT political hopefuls on ballots across metro Atlanta earlier this month. He lost — as did eight others — but he ran one of the most credible campaigns of the bunch, even picking up 21 percent of the vote against longtime pol Michael Julian Bond in the Post 1 At-Large race.

Though he’s enjoying life away from the campaign trail — that was him picking up a few items at a Moreland Avenue Kroger Thursday morning — Brackman’s also spending his newfound political capital on backing candidates in the Dec. 1 runoff. There’s no indication Brackman is collecting chits for a future run, but it never hurts.

There he was Nov. 18 at a packed LGBT fundraiser for Mary Norwood (photo). His endorsement was energetic and full-throated. In total, he recently endorsed three candidates in a note on his Facebook page:

* Mayor: Mary Norwood. I’ve had the privilege of knowing Mary for many years in her role as the Post 2 At-Large City Councilwoman. In that time, I’ve been able to work with Mary on a number of issues and have always found her not only accessible, but open to listening to ideas from the community.

* Post 2 At-Large: Amir Farokhi. I first met Amir back in May of this year, on the campaign trail. Over the following weeks and months, I had the opportunity to get to know Amir better and found that we shared a great passion for many of the same issues. Beyond just that, we shared a similar vision for how to solve the challenges that face our city.

* GA House District 58: Simone Bell. Simone and I have known each other for many years. I’ve always had a great admiration for Simone’s service and passion for community activism. I feel strongly that Simone will continue to represent us all in the GA House in ways that other candidates simply can’t do.

Bell, by the way, was also one of the 15 LGBT candidates on Nov. 3. She placed a close second to Asha Jackson—27 to 24 percent—in the District 58 state House race. If she takes the runoff Tuesday, she’ll become the first African-American lesbian elected to a state legislature in the U.S.