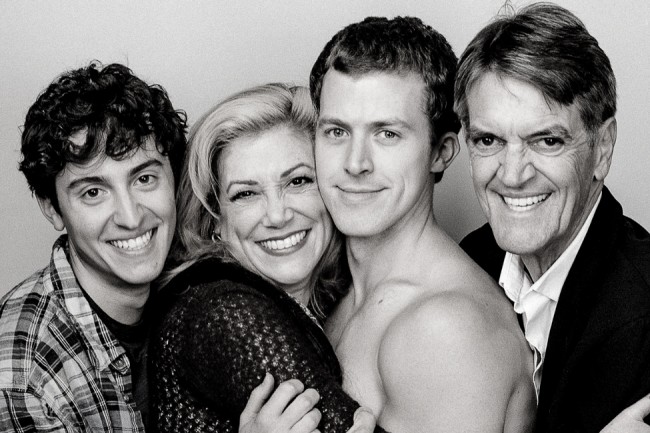 Freddie Ashley entered his 13thyear as artistic director of Actor’s Express with a dramatic, theater-worthy bang. None other than the Kennedy Center honored Ashley in August with its American College Theater Festival Medallion of Excellence.

Ashley chatted with Q about the “really funny and really sexy” play, the May-December romances that inspire it, and that big-deal award.

Congratulations on the Kennedy Center award! What does that mean to you?

It was a real honor to receive the Medallion of Excellence. It was particularly meaningful to me because it was in recognition of my years of service and commitment to the MFA Playwrights Workshop, which is an important program to me.

I’ve had the opportunity over the years to develop new work with playwrights who will be shaping the American theater in years to come and have formed some really important friendships and professional relationships. I think there is no greater honor in our profession than to be of service to playwrights.

So how did Skintight land on your radar?

I've known playwright Joshua Harmon for around 10 years. He was AE’s Playwright in Residence back in 2010. A few years ago, he told me about an idea he had for this play. He then got commissioned by the Roundabout [Theatre Company in New York City] to write the play and they produced it last year with Idina Menzel. I saw the production in New York, and it was terrific.

What was it about the play that drew you in?

It’s really funny and it’s really sexy. It is a play that comes right out of our current zeitgeist. I love that Joshua Harmon writes characters on polar ends of an argument and never chooses sides. There will be people in the audience who form all sorts of allegiances to the characters, but Josh never forces the audience’s hand.

What is it about Harmon’s work that keeps AE coming back to him?

Josh’s work is unflinching and fearless and always scathingly hilarious. His characters say utterly outrageous things and have some very thorny edges, but there’s always a lot of heart in his writing.

One thing he does especially well is explore the intersections of the personal and the cultural. Whether it’s cousins quarrelling over a family artifact and arguing about what it means to be Jewish in today’s world in his play Bad Jews, or a gay millennial trying to discover his self-worth while navigating the dating scene in New York in Significant Other, he gets at really big societal questions while focusing microscopically on person-to-person relationships. And he does so with an amazing combination of scathing wit and a warm heart.

What does the play say about America’s obsession with youth and beauty?

I’m not sure that I would characterize the play as “saying” something about America’s obsession with youth and beauty. Rather, I think it’s really looking at it and asking questions. What are the things that drive people to younger partners? Why is beauty more important than other factors when entering into a relationship?

And on the flipside, why do we feel the need to make assumptions or judge relationships that may fall outside of socially acceptable expectations? Who’s to say what works best for some couples? So I guess there’s a tension in the play between the questions of why and why not.

Wendy Melkonian is one of the best comedic actresses in our city, but then she rips the rug out from under you with her capacity for thoughtful, dramatic honesty. Chris Kayser is the actor most of us aspire to be; consummately professional, endlessly talented and generous to his costars. Their work is just as accomplished as anything you’d find on Broadway.

There are some newer folks on the scene in our cast too. Truman Griffin and Jake Berne are so great and are able to go toe-to-toe with the vets in the cast. Christopher Repotski and the always divine Marianne Fraulo play relatively small roles as members of the household staff, and they both turn out to be these stealth characters who pack some fun and unexpected punch.

What’s next in the 32nd season at Actor’s Express?

We will follow it up with a Hitchcockian thriller called Downstairsby Theresa Rebeck. Following that is the musical Fun Home, which is finally getting a professional production in Atlanta. That will open in January. The season will round out with The Brothers Size by Tarell Alvin McCraney and Desire Under the Elmsby Eugene O’Neill.