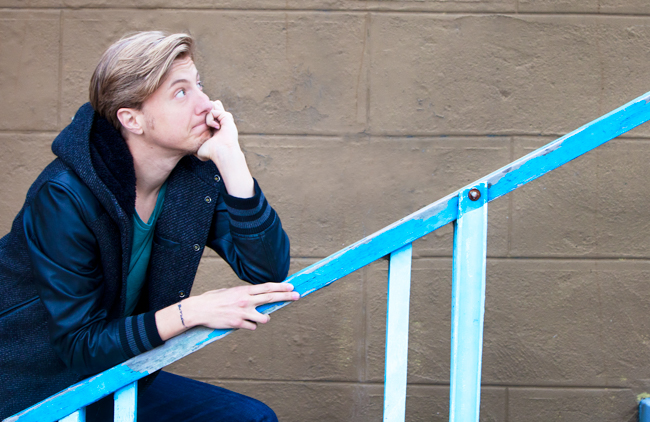 When Atlanta’s own Scott Turner Schofield first staged his groundbreaking one-man show Becoming a Man in 127 Easy Steps in 2008, he didn’t really have 127 stories. Now the writer, actor and queer pioneer does have that many and more, and he’s filming the best of them in front of live audiences back where it all began, at 7 Stages in Atlanta.

“The stories you’ll see at 7 Stages are the ones audiences all over the world have loved the most over 10 years – like a ‘Greatest Hits,’” he tells Q. “They’re vetted, they're polished – my absolute best work. They’re directed for film this time, too, and the movie set gives them a whole different look and feel.”

The show stages on Aug. 25 at 8 p.m. A few tickets were still available at this writing.

For the uninitiated, Schofield’s show chronicles his transition as a trans man and has become a bona fide phenomenon for handling the subject matter in an approachable way.

“[The show] is known for being the friendliest and most accessible show for people – trans or not – who are new to the transgender topic and want to get to the heart and soul, past the genitals and hormones,” Schofield says. “Each night will be a different set of stories about how I became a man, covering everything from being forced to wear a dress, to one of those ‘accidental homosexual experiences’ they say every man has, to meeting the partner of my dreams. We’ll be taping the live show, so folks will get to see how that showbiz happens, too.”

Schofield has also been well received for his plays including Underground TRANSit and Debutante Balls.He has toured with trans male Georgia troupe Athens Boys Choir, published books and essays worthy of a Lambda Award nomination, and done theater across the country and around the world.

As prolific as that sounds, it's not the half of Schofield’s work, which also includes becoming the first transgender actor in a major daytime soap role as Nick on The Bold and The Beautiful. He even popped up as a bachelor with a surprise on a short-lived dating show on ABC. In Atlanta, he was a Pride grand marshal, helped launch books with Amy Ray and T. Cooper, and got to know Project Q intimately.

Tickets to the filming of 127 Steps go toward making the movie a reality. We asked him to let us in on the local return of the show and his life since “becoming a man.”

What does it mean to you to bring Becoming a Man in 127 Easy Steps back to Atlanta?

My very first public performance was at Charis Books in 2001. Then 7 Stages in Little 5 Points commissioned and premiered this show in 2008. Both shows sold out, and that level of support has fueled all of my success since.

I chose to film the show here – we could’ve done it at a studio in Hollywood – but I want the world to see what a special thing we have going on in Atlanta. Our community’s magic is part of who I am – it has to be part of this show!

How do you view the state of trans America with you and others making strides in the public eye?

Real talk, with love: Gays and lesbians in surprising numbers are super conflicted about supporting transgender people, while straight people are way more supportive than ever before. Just like with marriage equality, we need a majority who stand for our human rights in order to get them. So I hold out hope that my gay and lesbian brothers and sisters will remember what it was like for them 20 years ago, and why we need them to be our allies now. Then we will see some real change.

How do you expect the film to add to the public discourse/greater good?

All the really famous trans people, all the famous stories about us, are about trans women. Which is wonderful! And, also, trans men need to be seen and embraced.

127 is a proven, artistically excellent cultural contribution, so I hope that it will bust through this transmasculine invisibility cloak and be there as a positive and powerful resource for all the guys who want it, for their friends and families who need it, and for the culture at large to be both entertained and enlightened by it – the way so many audiences have been already.

What else are you up to these days professionally? Personally?

I recently starred in a major motion picture called The Conductor. I play a 1920s jazz musician, the best friend of historical figure Antonia Brico. It premieres in Europe in October.

I also got married in December. Personally and professionally, it’s like I finally broke into my own wildest dreams, and now I’m learning how to live there. I’m grateful that I stayed alive, because that was a hard choice I made, and I’m beyond grateful to everyone who encourages me to keep going. It is vital that we all help each other stay positive so we can all “be the change we want to see in the world.”

Anything else you’d like to say to queer Atlanta?

Coming to see these shows isn’t “just going to a play.” Showing up to this live filming will show the world that a lot of people believe transgender – and specifically trans men’s – stories matter. We need this right now. So you get to be entertained, but you’re also doing something that will be supportive to everyone who watches the film long into the future.

A version of this interview originally ran in Q magazine. Read the full issue below, and pick up a new edition each Wednesday.