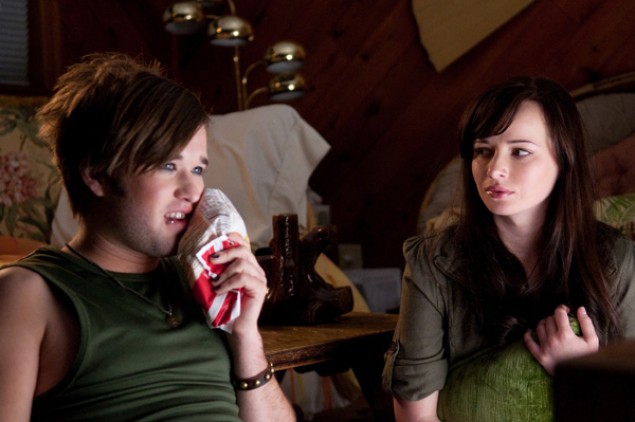 If you’ve been hiding under a rock, Atlanta’s LGBT film festival is in full swing. Out On Film opened Thursday to a packed house and continues daily through Oct. 11. Take a look at two of Friday’s features with principals from the films. 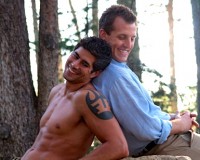 Director Coley Sohn of “Sassy Pants” (top photo) and hunky actor Joel Rush of “Love or Whatever,” both Friday nighttime features, spoke about their movies by way of introduction.

Rush (second photo, left) will be there in person to answer questions and get pulses racing after his movie, along with its director Rosser Goodman. View Friday’s full lineup in Out On Film’s day-by-day online guide.

How out filmmaker Coley Sohn got Oscar-nominated actor Haley Joel Osment to be part of her first feature – and play gay to boot – is something she still shakes her head at, but she isn’t complaining. Her movie “Sassy Pants” debuts at Out On Film Friday night.

Adapted from her short film “Boutonniere,” “Sassy Pants” looks at the relationship between high school student Bethany Pruitt (Ashley Rickards) and her domineering mother June (Anna Gunn of “Breaking Bad”). June has home schooled her daughter and wants her now to get an online bachelor’s degree. Bethany objects and runs off to live with her gay dad, who is in a trailer park with his much younger party-boy flame Chip (Osment).

Cohn has been pleasantly surprised at the reception to the film and the fact that it has played at so many LGBT film festivals.

“I think that the characters here can be a little larger than life, but what people tell me is that there is real heart to this,” she says. “People really like Bethany.”

When she adapted the short into a full-length version, she had to create a lot of new characters, including a chain-smoking grandmother pretending to be on her deathbed.

Osment is the name attraction of the film and he throws himself into the role. His name came up for the part, and Sohn didn’t think it was possible. When she realized it might be, she wanted to see him read to see if he could come across as gay.

“From the first time I saw him read, I knew he was right,” she says. Miraculously, he agreed to do the independent movie.

The character of the mother is inspired by a few people, and Sohn feels most people at some point in their lives have something – or someone like June – holding them down.

“I think we can all be stifled, crippled somewhat, and this is about learning to say ‘fuck it,’” the director says.

“Sassy Pants” releases later this month before hitting VOD and iTunes at the end of the year. It screens Friday, Oct. 5 at 7:10 p.m. as part of Out On Film at Midtown Art Cinema.

“Love or Whatever” is nothing if not modern. It’s an equal opportunity romantic comedy featuring a gay romance, a bisexual romance and lesbian romance – directed by Rosser Goodman, herself an out lesbian.

Goodman and one of the hunky stars of the film – Joel Rush – will be in attendance at Friday night’s Out On Film screening. We spoke to Rush about the movie in advance of his Atlanta appearance.

In the film, Corey (Tyler Poelle) is a gay man with what he thinks is a great life. Just as he is getting ready to propose to his boyfriend, the boyfriend announces he is breaking up with him – to be with a woman. Corey throws himself back into the dating world with the help of his bawdy lesbian sister Kelsey (Jennifer Elise Cox) and learns about 2012 mating including Grindr, where he sees the hunky pizza delivery guy he just met, Pete (Joel Rush).

Goodman specifically made this a film with something for everyone, spending months working with the writers to make even the supporting characters feel real. And the auditions process was grueling, Rush says.

“I had more auditions for this than most studio films,” he laughs. “I auditioned and read so many times together with Tyler that by the time we had the parts we had become friends,” he says. “I think that shows in our chemistry.”

Rush appeared in the last two “Eating Out” movies and got one of his big breaks as part of the cast of ABC’s reality show “True Beauty” a few years ago, giving us a perfect opportunity to highlight his assets in the Morning Fix in 2010. So of course we couldn’t resist exposing Rush again in today’s Fix.

Rush says he was surprised at how non-generic “Love or Whatever” turned out to be, despite being a romantic comedy.

“A lot of movies we see are copies, not really in a realistic light, but this has a great script and a happy ending,” he says. “It’s not about being gay or lesbian; it’s about falling in love.”

“Love Or Whatever” screens at 9 p.m. as part of Out On Film’s Friday lineup at Midtown Art Cinema.

Columnist Jim Farmer is festival director of Out On Film