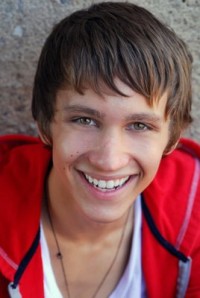 Actor Tye Olson had only been in Los Angeles four months when he learned that he had gotten a role in the feature film “Watercolors”—the lead role, to boot. The film screens Wednesday as part of Out on Film.

Even Olson (photo) has to admit that he never expected that kind of success so quickly after moving from Minnesota to Los Angeles.

In the film, showing Wednesday in a special screening by Out on Film, he stars as Danny, an introverted high school student who meets Carter (Kyle Clare), a swimmer dealing with emotional issues. The two begin a relationship that lasts a relatively short time but stays with him until his adult days. Both Olson and director David Oliveras will be present at the screening.

At first, Olson was reluctant to take on the role.

“I was trying to be a straight actor; I was told that I needed to do that,” he says. “There was also a love scene, and I didn’t know how that would turn out.”

Looking back, Olson is happy he took the job.

“It’s my favorite role so far,” he says.

He feels that some of his own real life experiences helped him portray Danny. Shortly before moving to Los Angeles, he came out to his family—and was disowned by his father, although they are much closer now.

The “Watercolors” cast includes Greg Louganis as a swim coach and Karen Black as Danny’s art instructor. Olson’s scenes with Black are some of his favorite in the film.

Olson has actually been living in Atlanta now for a few months. He moved here with his boyfriend Tristan Trenkle, a producer of the locally shot “The Mo’Nique Show,” and will be here until mid-May. So far, he has thoroughly enjoyed Atlanta–especially the people and the weather–and is contemplating moving back here when Trenkle returns in the fall to resume taping.

“Jane is just as funny as she is on TV,” he says. “I loved working with her.”

He is also appearing as a gay character in the Showtime series “The United States of Tara,” the second season of which debuted this week. He calls that a great experience, although he did not get to share any scenes with Toni Colette.

“I was really bummed about that,” he says.

Wednesday’s screening is the Atlanta debut of the film after being on the festival circuit over the last few years. Director Oliveras has shown the film at non-LGBT film festivals as well, and has received positive responses, he says.

“Everyone can relate to these characters–what the kids are going through, as well as the mother and the father,” he says. He admits some of the film is autobiographical, save for the swimming background.

Finding the right two actors was vital to the success, he says, given the emotional demands of the characters, including a sequence involving school homophobia.

The director has always been a fan of actress Karen Black. He grew up watching her in ’70s movies.

He said he never dreamed she would accept the role in “Watercolors,” but the actress responded to the script, appreciating the fact that it was a rarely seen love story between two young gay men.

Oliveras has not decided on his next project, although he says he has several ideas. He’d love to do a thriller, something like “Dressed to Kill,” or maybe even a “kung fu film, or a lesbian biker chick movie.”

Although he screened “Watercolors” at Savannah’s LGBT film festival last year, this is his first trip to Atlanta. He is looking forward to seeing the city–and spending some time with Olson.

Contributor Jim Farmer is the director of annual Out On Film gay and lesbian film festival, and he hosts Wednesday’s screening of “Watercolors.” He is an Atlanta-based writer and public relations professional specializing in film promotions, and has been a theater critic for more than a dozen years.