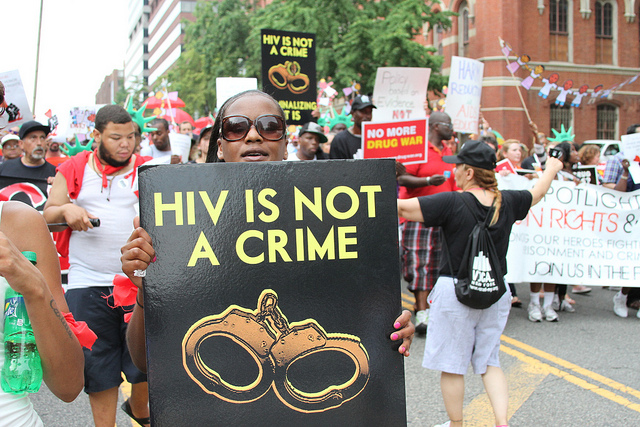 The Georgia Coalition to End HIV Criminalization started in 2013 as a working group and eventually shifted into the coalition of individuals and organizations it is today – about 50 people, anchored by nine local and national organizations – just last year. It has hosted educational events for the public and elected officials, conducted trainings with healthcare organizations, and organized testimony before the state legislature.

In Georgia, HIV-positive people face a felony if they do not disclose their status before engaging in sex. The law also provides for penalties for activities including spitting, even though it can't transmit HIV. In practice, these laws force people with HIV to prove they disclosed their status, regardless of viral load, intent or actions taken to prevent HIV transmission.

The Coalition and other advocates for modernizing HIV criminalization laws argue that people with HIV face threats of a felony conviction under statutes that are decades behind science and out of sync with best practices for reducing the spread of HIV.

Nina Martinez, a coalition member, said she first learned about the issue of HIV criminalization in 2006. She has been doing HIV advocacy work for well over a decade and has been public about being HIV-positive. In 2006, she was one of the models on the cover of POZ Magazine, a publication for people with HIV.

When she picked up a copy to see the published photos, she ended up diving into the magazine’s feature story about Gary Wayne Carriker, an Emory student convicted of felony reckless conduct for failing to disclose his HIV status before engaging in sex.

“The July 2006 issue was on HIV criminalization, that was their feature story. I actually happened to have modeled for the magazine for that issue,” Martinez said. “When the magazine came out and I saw my pictures, that’s when I read the article talking about HIV criminalization and it actually talked the Emory medical student, Gary Wayne Carriker.”

Martinez said she didn’t quite realize how big an issue it was at the time.

“It was something that I had wanted to work on, but it seemed like such a niche issue, something that you don’t think that it affects a lot of people because nobody is talking about it,” she explained.

After getting involved with the working group that eventually became the coalition years later in 2015, she came to understand why HIV criminalization laws are in place – and just how harmful they are.

“I didn’t really know the history of these laws and that they were tied to federal money. The original Ryan White Care Act – in order for states to receive money to help people living with HIV with their treatment – in the original grant itself, it said that states had to have laws on the books to prosecute transmissions,” she said.

That portion of the Ryan White Care Act – the key source of federal dollars to address HIV and AIDS – was removed in 2000, though nearly three-dozens states still have HIV criminalization laws in place.

'These laws don't align with science'

Georgia’s laws don’t require transmission nor intent to transmit. They hinge on one factor: disclosure. More specifically, a person living with HIV has to prove they disclosed their status in order to avoid a conviction, like by having a recording of the conversation where they disclosed their status. The laws were later amended to also make it a felony — with a sentence of up to ten years — for a person living with HIV to spit on a law enforcement officer, although saliva cannot transmit HIV.

“These laws, one, were conceived and enacted at a time when there wasn’t the same medical advancements that are in place today,” Kornegay said. “They don’t align with science.”

For instance, a person with HIV that sticks to their medication regime can become virally suppressed, which means they have little chance of transmitting HIV. Treatment options including PrEP and PEP can substantially reduce the likelihood someone will acquire HIV. PrEP, or pre-exposure prophylaxis, is a daily pill that can prevent HIV, while PEP, or post-exposure prophylaxis, is a month-long regime to be started after a potential exposure to the virus.

Kornegay added that, given the startling statistics about current HIV rates, if these laws were intended to prevent the spread of HIV, they are not working.

“In 2016 the CDC released their study that said if nothing changes, one in two black gay and bisexual men will be diagnosed with HIV in their lifetime. So if the laws were in place to help they haven’t helped,” he said.

Martinez and Kornegay agreed that the laws likely lead to people not getting tested for HIV.

“If you are diagnosed with HIV and you go to get care, that can be used as evidence against you to say that you knew your HIV status. So doing what is considered the public health good can ultimately come back and haunt you in court,” Martinez said.

Paulk also spoke about the challenges the laws present in court for people living with HIV.

“Given the near impossibility for a defendant to prove disclosure, this creates a scenario where the testimony of one sexual partner’s word is weighed against the other partner. The unspoken presumption is that the [person living with HIV] is assumed guilty based on the mere fact of their HIV status,” he said.

Martinez said the postcards are quite moving.

“I almost cried because I feel like kind of the only person who has been out there who is positive who has been saying this is a problem,” she said. Seeing the postcards made her appreciate that, “there were six more people living with HIV saying, you know, this is a problem and they are not going to stand for it either.”

In addition to Wednesday’s event, the coalition is making plans for a study committee created by state lawmakers to examine the issues impacting Georgians with chronic illnesses, including HIV. The committee will likely seek testimony or public comment during its first meeting in September. The coalition will prepare speakers and provide information about the impacts of HIV criminalization laws.