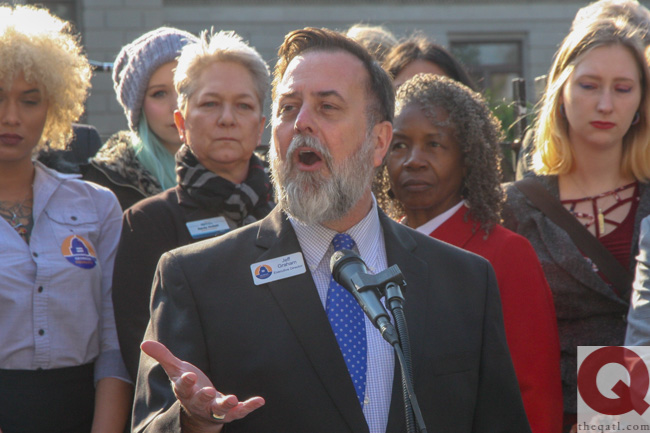 With the days in the 2019 legislative session waning, faith leaders, business leaders and gay conservatives joined together to call on Georgia lawmakers to pass an LGBTQ-inclusive civil rights bill.

The press conference was held at Central Presbyterian Church across the street from the state Capitol on Thursday. About 50 supporters were on hand as part of Georgia Equality’s LGBTQ Lobby Day.

A broad civil rights bill that would protect LGBTQ people was introduced in January but has yet to gain any traction.

Jeff Graham, executive director of Georgia Equality, cited a study by the Movement Advancement Project showing Georgia is one of only six states with a negative score on LGBTQ equality policies.

“That is practically a crisis,” he said. “Because we don’t just lack laws that protect us. Some of the laws in Georgia are actively hostile toward members of our community.”

Graham (top photo) noted that Georgia is one of only three states without a statewide nondiscrimination law that protects any class of people. He added that for the sixth year in a row, an anti-LGBTQ “religious freedom” bill was introduced.

“Yes, the legislature can provide additional protections to people of faith, but they can do that through passing a comprehensive non-discrimination law that includes religion, race, color, national origin, sex, age, disability, veteran status and sexual orientation and gender identity,” Graham said. “That’s the promise of Georgia. That’s the fairness that Georgians believe in.”

“As a pastor, it has been frustrating coming down to the Gold Dome year after year trying to explain to politicians that I do not want religion to be used as a tool for discrimination,” he said.

Flippin called on lawmakers “to protect everyone.”

“It has taken many years even in Georgia — the heart of the civil rights movement — to pass a state civil rights law that honors the legacy of the 1964 Civil Rights Act,” he said. “But I hope that with our efforts, that we can convert Georgia to be the state that they claim to be.”

“Even if you’ve never been fired because of who you are, LGBTQ people know that we’re vulnerable against discrimination in our daily lives and too many of us spend too much time looking over our shoulders in fear,” she said.

Marisa Pruitt DeRossett, a board member of Log Cabin Republicans, said the lack of protections makes Georgia “a very, very vulnerable place for people that are already vulnerable — the LGBTQ community.” She called for a bipartisan effort to pass a civil rights bill.

“The GOP has a choice, and the GOP has an opportunity to choose fairness over discrimination, hope over fear and freedom over oppression,” she said. “Discrimination is not a conservative value and does not stand with our beliefs in limited government, free markets, low taxes, personal responsibility and individual freedoms.”

This is the first year of a two-year legislative cycle, so House Bill 19 — the civil rights measure introduced in January — will carry over into 2020. Graham said he’s holding out hope for that or another bill to make legislative progress.

“It would be wonderful to have a bipartisan Republican-led bill be introduced in the final days of the legislative session or early 2020,” he said. “We never give up hope that we can do the right thing.”