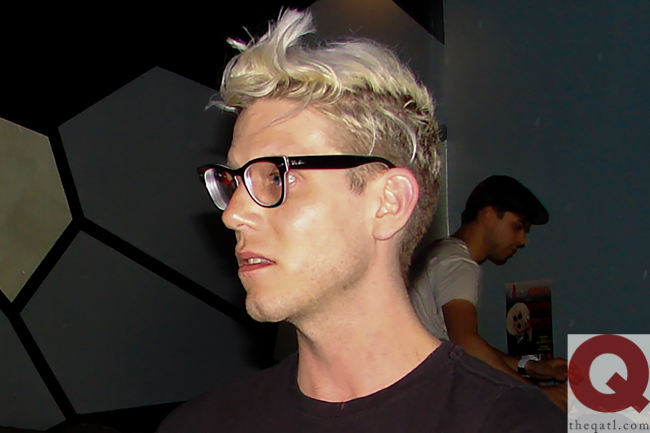 WATCH | Sharon Needles fires back at Atlanta ‘haters’ PHOTOS | Sharon Needles delights her Atlanta fans What was intended as a sit-down meeting called by “RuPaul's Drag Race” winner Sharon Needles to dialogue with LGBT Atlanta detractors of racial imagery in her act and use of the word “nigger” got heated at Jungle Wednesday as the club prepared for a Needles appearance and possible protest. Queer Atlantans Enakai and Maura Ciseaux agreed to meet with the drag artist (aka Aaron Coady, photo) to hear Needles’ take on the controversial statements, which she has defended in the past as her right to make as an artist. Reporters as well as Jungle officials also attended the session, which was the most vocal Needles has been on the issue. Needles said the meeting was called because detractors in hometown Pittsburgh weren't willing to have a conversation, instead aiming aiming violence at her and her home. In contrast, she welcomed a dialogue with people willing to have a face-to-face about it. Enakai Cisneaux offered similar stories about the black experience in queer bars that he said don't provide a safe space for people of color. Instead, he's faced with gay people stereotyping or flat-out ignoring him. “My intention was never to hurt anyone,” the performer said to open the conversation. “As a transgressive artist, I and a lot of my idols use language and shock imagery to juxtapose certain images and words – like I put the word love next to ‘that word’ -- to mock and shine a light on things that scared the shit out of me when I was young. Another word with a double “g” was thrown at me a lot. I've been called faggot, queer, and it scared the shit out me. I know what it’s like to be hurt by those kind of statements, and my intention is to subvert them and bring them to light.” It’s an expansion of Needles' viewpoint on the motivation behind her work that she stated in earlier interviews this week. Enakai Ciseaux countered that performances in Nazi uniforms and signing an autograph for a fan of color with “love you nigger” aren’t juxtaposing anything – and are actually oppressing, not just hurting people. “You’re not black,” Ciseaux said. “It’s not your world, girl. You can subvert white gay images all you want because you were oppressed by that. No one has ever called you ‘nigger.’ It’s not yours to subvert." Conciliatory, Needles nodded in understanding and went on to try and explain that the act, and the performer, are evolving. “I’ve done a lot of soul searching over the last several days, and the word is out of my vocabulary,” Needles said. “I don’t want to be counter-productive. I want to bring people together,” conceding further that, “I understand that my shows aren’t for everyone and how it can be misconstrued.” Unsatisfied, the Ciseauxs asserted that Needles' statements felt like the performer was saying the offending material was dropped, but that they weren’t hearing a concession that anything was done wrong. They asked for a public apology and for a specific plan for not using racial imagery in the future. Needles apologized three times for hurting anyone, including the Ciseauxs. "I do apologize for anyone who was offended or hurt, because that was never my intention," Needles said. The performer stopped short of providing a plan for the future, citing that “I won’t be barked at for an apology and be forced to make a statement. If I decide to do so, it will be on my own terms.” The discussion devolved rapidly. After making clear that their goal was to "never see [Needles] again" and not frequent Jungle "as long as they employ people like you," the Ciseauxs stood up and left. After the pair walked out without goodbyes, saying they’d “heard all that we needed to hear,” Needles broke down into tears. “Language has the power that we give it,” the performer said. “If my art isn’t creating conversations, then what the fuck was this? Real racism hides in dark, filthy places, and I have a big spotlight on me that I try to use to drown out the wrongs of race, religion, gender and creed and put it in the spotlight for all to see. I am more than willing to talk about it. I'm not hiding.” Despite – and perhaps prodded by – the controversy, Jungle sold out of 300 presale tickets to Wednesday's show and will accept newcomers at the door until filled to capacity for the Fantasy Girls show. Doors open at 9 p.m. It's not clear if the protest will still go on. UPDATE: Less than 10 protesters grew to about a dozen during the appearance. The demonstration was peaceful; participants held signs in silence while a capacity crowd filed in, and there was no disruption. From the stage, Needles fired back (watch video).