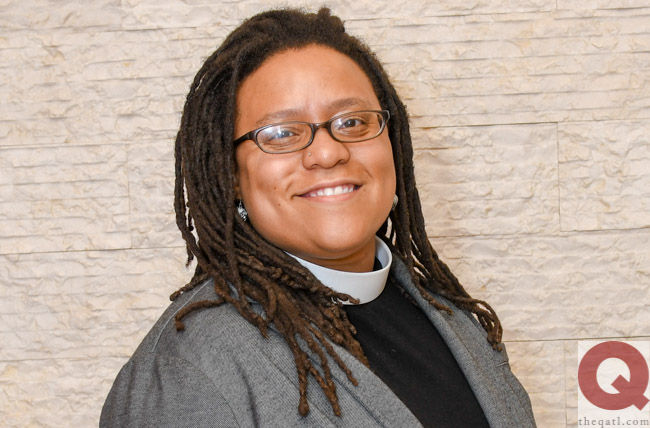 Kim Jackson wants to go from Atlanta Pride grand marshal in 2019 to being the next representative for state Senate District 41 in 2020.

Jackson, an ordained priest in the Episcopal Diocese of Atlanta, would become the state Senate’s first out lesbian member if elected. It’s her first run for office, but she had designs on doing so from a young age.

“I knew that I wanted for run for office when I was 13 years old and went to a city council meeting in rural South Carolina,” she told Project Q Atlanta. “I think it was this internal visceral call that I want to be a part of change. That’s where it started.”

Jackson said she’s running now to safeguard the Democratic seat in the district that includes Scottdale, Pine Lake, Stone Mountain, Clarkston, Tucker and Lilburn. Sen. Steve Henson, who also serves as minority leader, will leave the Senate in 2020 after 17 years in office.

Jackson, who lives with her wife Trina in Stone Mountain, got advice about the run from three parishioners who she got to know when she was an associate rector at All Saints Episcopal Church in Midtown. They happened to be state Sen. Elena Parent and state Reps. Mary Margaret Oliver and Matthew Wilson.

“One of them called me because in an informal conversation at church, someone asked me what my five-year or 10-year plan was and I said I wanted to run for office, but I would not want to run against Steve Henson,” Jackson said. “One day when he doesn’t run, I would run for that seat. I didn’t think it would happen this soon but I’m grateful to have the opportunity.”

Wilson, one of five openly LGBTQ members of the legislature, said he was proud to endorse Jackson in the race.

“Kim is not just a friend but also my pastor, and there’s no one who better understands the needs of District 41 than her,” he told Project Q. “We need her experience in the state Senate fighting for District 41 and the broader progressive community, and I am going to work very hard for the chance to call her ‘colleague.’”

Jackson said passing an LGBTQ-inclusive civil rights bill would be one of her first orders of business if elected.

“Because we have no comprehensive antidiscrimination bill, we are unprotected as far as anyone who can exist with minority status,” she said.

She also supports Medicaid expansion, better access to childhood care and raising the minimum wage. She’s against the abortion ban that passed in the legislature this year.

“I was disappointed by what happened in the legislature, but also really proud of so many people who stood up and told their stories and tried to demand better for Georgia,” she said.

Jackson has worked with lawmakers on getting rape kits counted and advocating against the death penalty. She’s also fought anti-LGBTQ “religious freedom” bills the last several years, including at a 2016 press conference (second photo) with faith leaders outside the state Capitol.

State Rep. Park Cannon, a Democrat from Atlanta and one of five LGBTQ members of the legislature, issued a commendation to Jackson in 2018 for her social justice work.

Jackson is aware of the significance if she were to become the Senate’s first out lesbian member.

“I have many identities that go along with that and I sit at the intersection of so many identities. Fundamentally my job and calling is to represent the people of District 41,” she added.

Former state Sen. Curt Thompson's bisexuality was little known until after he left office in 2018, but Thompson told Project Q in July that his colleagues were aware of his sexual orientation.

Jackson was one of 12 activists, politicians, faith leaders and organizations chosen to be an Atlanta Pride grand marshal in this year's parade, taking place Oct. 13.

Sabrina McKenzie, a self-proclaimed “dancing preacher,” almost pulled off a shocking upset in the 2018 Democratic primary against Henson. She lost by about 100 votes out of nearly 14,000 votes cast.

A background paper on McKenzie released to Project Q during the 2018 campaign revealed numerous anti-LGBTQ views she had expressed on Twitter and YouTube going back to 2012. McKenzie responded by saying “I love homosexuals” and mentioning she had a gay brother.