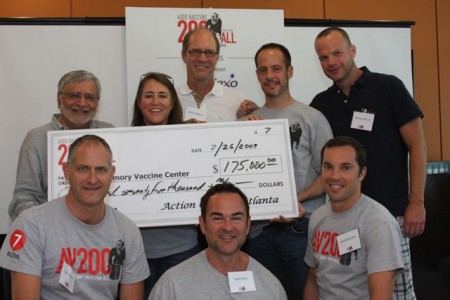 When organizers of Action Cycling 200 set a goal, they tend to surpass it with the ease of Lance Armstrong zipping along a flat stretch of terrain.

Even in the midst of an economic recession, participants in the annual cycling event raised $175,000 for the Emory Vaccine Center, an amount nearly 65 percent higher than last year’s total. Riders and event organizers gathered July 26 for a closing party and to present the check to the vaccine center, which develops vaccines for HIV and other infectious diseases.

In 2008, the annual 200-mile trek’s 65 riders helped raise $106,000. But this year, the number of riders increased to 85 for the May event, helping to boost the fundraising total to $175,000. The fundraising this year also benefited from non-cycling events, including a silent auction and fashion show with bare-chested Atlanta firefighters in April.

Since its inception in 2003, Action Cycling Atlanta, the group that stages the ride, has raised $575,000 for the center.

View the Project Q Atlanta photo album from the closing party or view photos from Action Cycling 200, which kicked off May 16 from Emory.