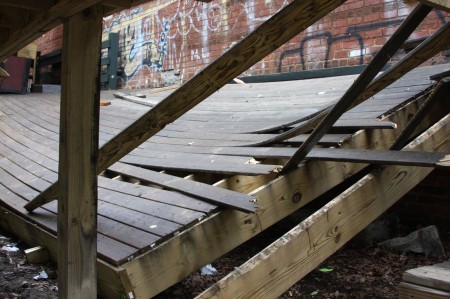 My Sisters Room reopens on Friday after a five-week closure, something we reported on Monday. And as Southern Voice adds, the East Atlanta lesbian venue is putting the best spin possible on renovations in the wake of a partial deck collapse last month:

“The place just looks really, really clean,” [co-owner Patryce Yeiser] said. “I hate that this [deck collapse] happened, but it was a good opportunity for us to make My Sisters’ Room even better.”

Another interesting note from the SoVo story: The bar is rebuilding the deck, something the owners initially said they wouldn’t do after the collapse that sent 12 people to the hospital. But this time, they sought permits from the City of Atlanta, something they didn’t do the first time around.

In an interview on Monday, Patryce Yeiser, co-owner of the club with her wife, Susan Musselwhite, said the deck is being rebuilt and is getting all necessary permits as well as help from City of Atlanta officials in making sure it meets requirements. The deck may reopen this weekend if it is completed, but Yeiser said she was not sure the reconstruction would be finished.

“This will be the most structurally sound deck in Atlanta,” Yeiser said.