A touch-averse guide to gay friends kissing and hugging 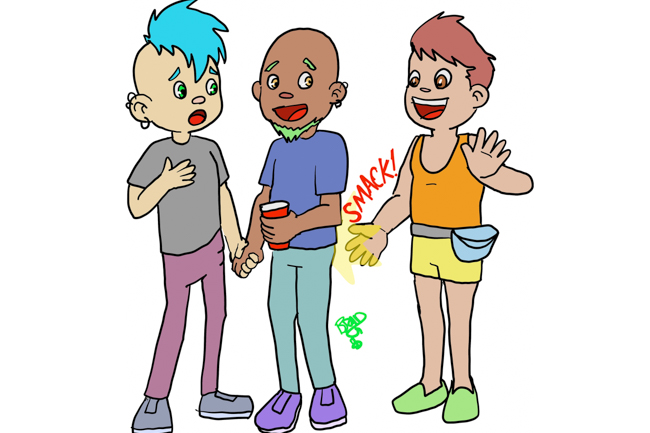 Navigating the “gay hug” gets tricky when you prefer lots of personal space between friends. It gets really tricky when your boo doesn’t have that affliction.

I’ve been with a fantastic guy for several months. I’m the gay guy with a herd of female friends. He’s the one who knows every gay man.

The lines seem blurry on what’s appropriate between gay men. Should I be OK with someone coming up to my guy, slapping his ass and kissing him on the lips?

Congrats on your new relationship! Ain’t love grand? Of course, it may come with a whole new set of questions.

LGBTQ rules of engagement vary from group to group, situation to situation, and person to person. Some people are touch-averse, whether it’s cultural or psychological or both, and it should be respected. Still, many LGBTQ people learned long ago to tolerate, or be ready to avoid, the “gay hug.”

It’s not bad to embrace embracing, but it’s also OK if you cringe when a sister-friend leans in for a squeeze or lip smack. And yes, you might snap a neck muscle in reaction to someone playing grab-ass without consent.

To answer your question, yes it’s a thing. To answer another, you get to decide what’s OK for you, and work with your boyfriend on what works for him and for you as a couple.

There’s yet another question that may or may not be lurking between the lines. You say you’re not the jealous type, but if the implication is that you’re insecure about him possibly cheating, return to your own first sentence: He is “a fantastic guy.”

Either he is and you can talk to him about all this and grow closer, or he isn’t and you can’t trust him. The answer lies at the end of Communication Road.

I’m pretty sure my husband is cheating on me with his best friend. Their inside jokes don’t include me, their movie nights look like nesting, and I can tell they’re rolling their eyes behind my back.

They were best friends for years before my husband and I met, and they have me feeling like a third wheel. They don’t even try to hide touching each other, or kissing each other hello and goodbye. Should I be worried?

Since they are best friends of many years, it sounds like they would have had plenty of chances to hook up long before you came into the picture, and they chose not to. What’s more, none of the things on your list of “evidence” spells cheating.

Inside jokes are just that – inside – so necessarily exclusionary. Any two people hanging out and laughing on a couch could “look like nesting,” and try as you might, you can’t see eyes rolling behind your back. And finally, some queers hug and peck each other as greetings.

If you’re still worried after considering all of this, ask about it directly. Either you’ll learn it’s true (doubtful but possible), or you’ll give your husband a chance to respond and put your worries at ease.

The Q is for entertainment, not counseling. Send burning Qs to [email protected].

Pick up QATLus each week at LGBTQ and allied venues around Atlanta, and find fresh content right here every day.