‘I’m with her’: Making the queer case for Stacey Abrams 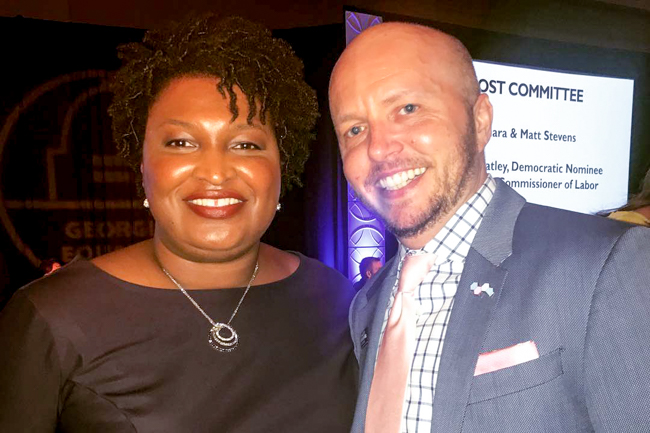 I am scared. I’m fairly certain that I picked the worst, but most true, words possible to begin any article.

Voting has always been exciting, and talking about elections with vigor has never eluded me. As a self-proclaimed “Stacey Abrams Fanboy,” amping readers up to cast ballots should have been one of the simplest tasks I’ve ever been assigned.

Instead, I’ve cried. I’ve paced. I’ve cried some more. I’ve wound myself up only to find myself right back at “But I’m really scared.”

Conventional wisdom dictates that speaking to people about hope — not fear — is the “best” way to power the polls. It’s the move that is seen to have integrity and show resilience. But what’s the right thing to do when we are genuinely afraid and traumatized?

After tormenting myself with that question, I’ve come to this conclusion: The fear we all feel right now is valid. While it’s important to be hopeful, not naming the things that scare us lets those who terrorize us off the hook.

Stacey Abrams fills me with hope, in part, because she deeply understands the things that frighten and threaten our communities. The thing I admire most about her is that she’s never afraid to name a problem, because she knows that’s the only way to fix anything.

I’m scared, and if you’re scared too, we need to vote for her because she leads in a fearless way.

The past two years have been tough. With every political storm, there’s a feeling of “this has to be the worst of it,” only to discover we haven’t event seen the eye-wall yet. People who were already clinging to the edge are being pushed into deeper despair, and knowing how to help often seems unclear.

As I write this, news is breaking that the United States wants to remove “gender” from United Nations human rights documents. That announcement comes on the heels of a leaked memo outlining the intent of HHS to offer a definition of “sex” that would exclude transgender and intersex Americans from access to public facilities and services.

All of that comes after a variety of attempts to remove LGBTQ protections from agencies across the governance spectrum over the last 18 months or so.

As a transman in the South, I’ve spent the last several days feeling scared and the last several nights talking a handful of trans folks around the country through their thoughts of suicide and self-harm. I’ve even tried this week to escape debating the humanity of transgender Americans by going to see a movie. As adorable as Ryan Gosling is, and as inspiring a trip to the moon might be, I only made it through 45 minutes before needing to leave and grieve in my car.

Needless to say, the idea of writing a positive message about why we should all vote has felt like an insurmountable challenge. Here’s what I need you to hear:

1. We must vote for Stacey Abrams. This is our best shot at creating a layer of protection for ourselves from a White House hostile toward LGBTQ communities. Abrams has unapologetically acknowledged us in every county and corner of the state, a feat no statewide candidate has ever carried out in Georgia.

2. Stacey Abrams can win. The numbers are there; we just have to do our part. “Our part” is more than just voting. Knock doors, make phone calls, do anything you have to do to make sure everyone in your reach understands the importance of voting for Stacey Abrams. Make a plan to vote, and make sure your friends and family have a plan for voting.

James Parker Sheffield is a native Georgian living in Atlanta. He guesses that a more “rainbow, glitter, and unicorns” feeling about elections and voting is available on Google for those who need it.

This column originally appeared in Q magazine. Read the full issue below: