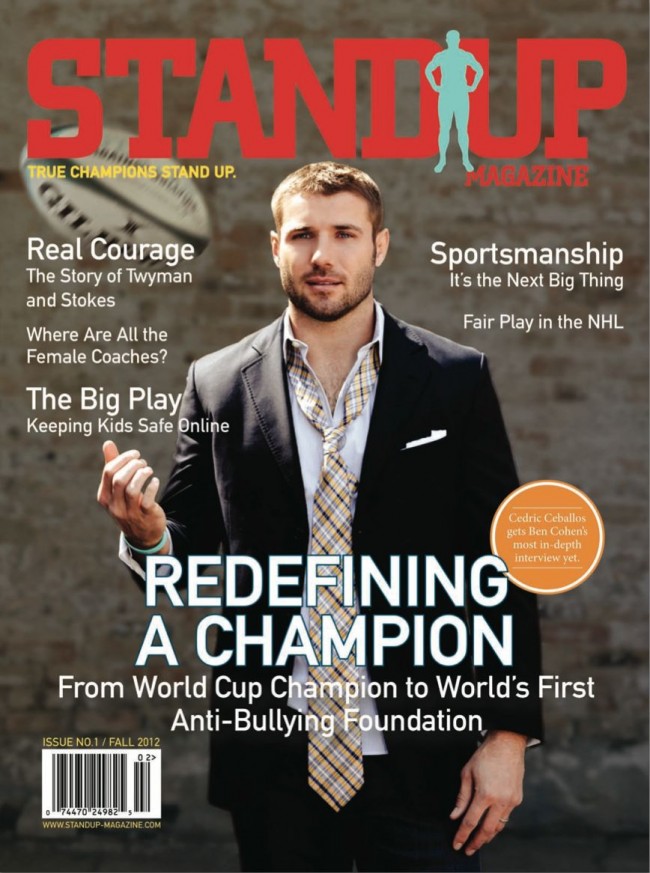 Drunken Sailor and anti-bullying advocate Ben Cohen is no stranger to putting his brawny good looks on the cover of a magazine. Or a calendar. So it’s no surprise that when we got a sneak peek at the debut of StandUp Magazine, it features the hunk, some chest hair and a rugby ball. The magazine has its official coming out on Wednesday during the posh Compete Sports Diversity Awards at Twelve in Atlantic Station. It’s the big event of the 2nd Annual StandUp Day, which marks the anniversary of the death of Cohen’s father. In November 2000, Peter Cohen was fatally injured as he tried to protect an employee who was being attacked. His death helped inspire Ben Cohen’s anti-bullying efforts. And those efforts take center stage again on Wednesday. To whet our appetite, the cover of the magazine – which is produced in collaboration with Compete publisher Media Out Loud – was provided to Project Q Atlanta for an early look. Of course we had to share. There’s Cohen, in a suit with a loosened tie and a shirt unbuttoned enough to show off that chest hair. You can just imagine that underneath, Cohen is sporting his own line of briefs that he’s modeled in an oh so delicious manner. “Redefining A Champion” is the magazine’s major piece, promising Cohen’s “most in-depth interview yet.” You know, now we get words to go with some of those in-depth photo shoots of Cohen we’ve enjoyed over the years. But really, Cohen’s message is inspiring. And so gay-inclusive. “It is time to celebrate a return to true sportsmanship and the spirit of fairness at its core. As sports role models, we have an incredible opportunity with StandUp Magazine to set an example for character in action, celebrating all sports and creating good on and off the field,” Cohen says in a prepared statement. Tickets are still available for Wednesday’s launch and celebration. Here’s what to expect:

The night will celebrate the second annual awards as it honors individuals and organizations who help fulfill Compete’s mission of uniting the gay and straight communities through sports. Featured awards include the sixth annual Compete Athlete of the Year Award, Corporate Diversity Award and the StandUp Ally Award, whose winner is selected by StandUp Magazine.

And don’t forget to take part in StandUp Day. Some additional details about that effort:

What can you do to recognize this important day? 1. Wear your StandUp branded shirt or wristband 2. Change your profile picture to the StandUp logo 3. Introduce as many people as possible to the StandUp Foundation and invite them to honor this day 4. Post the StandUp website on Facebook/Twitter with messages of support that link to our home page 5. Share/post your stories/pictures