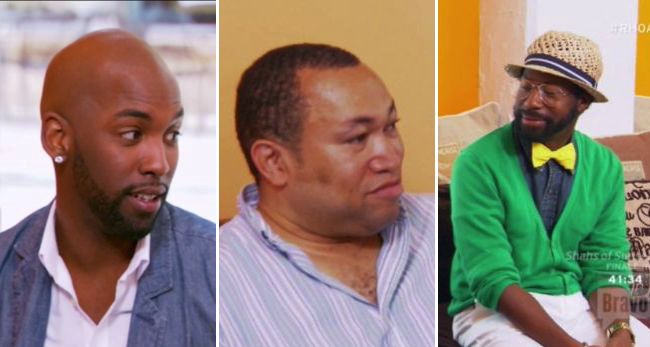 Not gay talent agent and publicist Rodney Harris, a sidekick this season on “Real Housewives of Atlanta,” is married. And not gay. How do we know? He called us Monday to say so.

So nevermind the shirtless hunks that he reps through Slamm Management. Or the gays he hangs with on the show. Or that the show is a recipe for coochie crack gay. Harris is not. Just like Hugh Jackman. Just like John Travolta. And just like Kordell Stewart, the former NFL jock and Porsha’s husband on RHOA.

Harris (photo center) rang us to take umbrage with our recent post that introduced new characters on the show, New gays for Atlanta’s “Real Housewives.” The video with the post includes snippets from a recent episode that chronicles the Bailey Boys, of which Harris was one. And it celebrates the gay sass that Carlton (left) throws at Porsha during a scene inside Cynthia Baliey’s namesake fashion school.

So when we warned Derek J and Miss Lawrence, too longstanding gay sidekicks on the show, about being pushed aside by the Bailey Boys, we got it a little wrong, Harris says. In the call, he said he’s not gay and detailed his complaints about the post in a follow up email:

Per our discussion, I am responding to your article, dated February 11, 2013. I absolutely don’t like being characterized as one of the new queens on RHOA. It’s disrespectful to both me and my wife…….whether intended to be a “light-hearted look at some new characters on the show.” As a journalist myself, I am disappointed in the lack of integrity and professionalism. Every credible journalist and/or blogger has a responsibility to check their facts, prior to printing and writing erroneous articles.

My appearance on the show is part of my employment as the (former) director of the Bailey Agency School of Fashion. Yes, I have worked as an agent for 19 yrs., for agencies in NYC, Milan, Paris and of course, here in Atlanta, where I own Slamm Management – (www.slammmanagement.com). I have known Cynthia for approximately 15+ yrs., and it was a natural fit for us to work together with her new school.

I would like my name and picture deleted from the article and a retraction. It’s not factual and I really am not appreciative of the characterization. If you have an issue with anything that I have stated, by all means, contact me.

So there. Not gay. No finger test needed.