A peek inside Charis Books’ new Decatur home in 19 photos 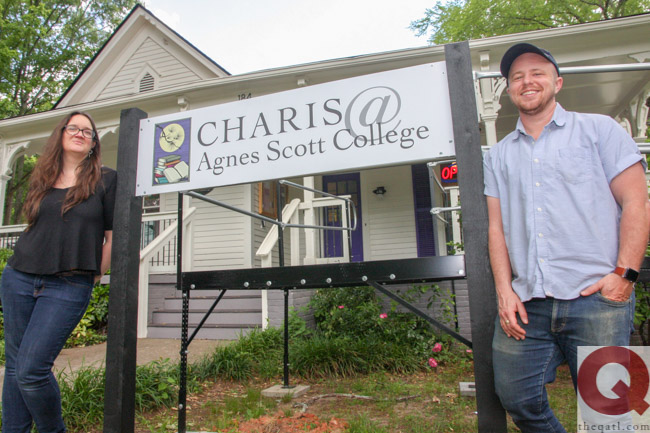 Charis Books & More — the South’s oldest indie feminist bookstore — is settling into its new digs in Decatur after 45 years in Little Five Points, and the reviews are in.

“[People have] been thrilled,” E.R. Anderson, executive director of the non-profit Charis Circle, told Project Q Atlanta. “People have been so sweet about it and so happy for us.”

Charis re-opened in a renovated building owned by Agnes Scott College on April 1. The move capped a five-year journey to find the perfect spot for the store’s next chapter.

Anderson (top photo right) said the plan was always to mimic the open and inviting feel of the Euclid Avenue store, where they were since 1994. Visitors to the new store will notice a similar color scheme inside.

“We kind of kept the spirit of Charis in Little Five Points, which I think people were concerned about,” Anderson said.

“They walk in and say it does feel like we picked it up and put it down over here,” she said. “But it’s more spacious and beautiful.”

Charis has a whole new batch of customers thanks to its location on the Agnes Scott campus. It’s across the street from the school’s cafeteria, and Charis shares a parking lot with the school’s faculty and staff.

“So they’re leaving work and coming in and buying stuff,” Anderson said.

Anderson said the Charis team is made of booksellers and non-profit people, so this kind of move was new to them.

“Redoing a building is not a thing that we ever wanted to do,” he said. “But here we are, and we’ve learned a lot and it’s actually been really great. And it’s been a huge community effort.”

A wheelchair accessible ramp leads up to the front porch of the store.

Another wheelchair accessible ramp is on the other side of the store.

The spacious front porch has several chairs for lounging and taking in a book.

T-shirts with previous Charis logos from over the years are framed and up on the wall to greet visitors when they walk in.

Charis sells a variety of items beyond just books.

Buttons are just a few of those items.

One corner of the store is dedicated to Agnes Scott paraphernalia.

“This weekend is graduation so we’re going to be super slammed,” Anderson said.

Your new favorite tote bag to bring to the grocery store.

The kids section takes over one corner of the store.

This is what Anderson and Look call their “wall of fame” showing photos of author visits over the years.

Books and bumper stickers and greeting cards, oh my!

“We are getting a new fancy sound system put in next week so that even if you’re back in standing room only, you’ll be able to hear all of the events really well,” Anderson said. “We never had a sound system at our old spot so that was a major thing.”

Free condoms and lube are available at two stations in the store, courtesy of the DeKalb County Board of Health.

“We're also working on getting Plan B,” Anderson said of the emergency contraception pill.

Memories from Charis years past.