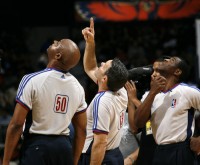 Those muscular NBA refs couldn’t figure it out on Saturday. But longtime fans of Atlanta’s pro sports team know what it is — the Sports Gods are smiling on us again. It’s about time.

On Saturday, the Hawks dropped Chicago in a wild ride to hit 19-10 and remain in second place in the Southeastern Division. The Falcons notched a win today, boosting their record to 11-5 and taking the fifth seed in the NFC. What a long road it’s been.

It was just last season that the Falcons finished 4-12 and were nearly laughed out of the league, what with the Michael Vick scandal and the embarrassing break up of owner Arthur Blank and coach Bobby Petrino. Now they are in the playoffs for the first time in three years.

The Hawks took the Celtics to a seventh game in their improbable playoff run earlier this year, despite underachieving during the regular season. Even that wasn’t enough to save GM Billy Knight, who quit in April after losing a power struggle with coach Mike Woodson. Before the seven-game set with Boston, Atlanta hadn’t seen an NBA post season since 1998-99.

Then there’s the Braves. I think Chipper Jones was in his late 20s the last time they reached the playoffs. The team can’t attract a worthy free agent this off-season despite opening their purse wider than ever before in recent years.

Let’s not even bother with the Thrashers, who at 12-19 are not in the cellar of the NHL’s Eastern Conference thanks only to a slightly more sorry New York Islanders.

So you’ll excuse me if I’m smiling right along with the Sports Gods today. They’ve shown us Atlanta fans some love this weekend. It might be short-lived, but allow me to bask in it just a little, please.

This post originally appeared on Jock Talk Blog at Outsports.com.