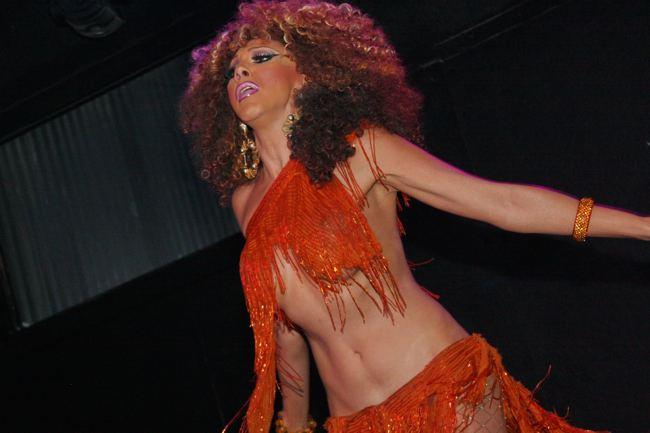 On Wednesday evening, longtime drag performer Savannah Leigh went public with her firing from Burkhart’s, posting this epic repudiation on Facebook. It’s alternatingly amusing, enlightening and frightening. But a good read. Leigh begins by saying that she never uses her Facebook page to talk shit and then jumps right into talking shit. About former friends, fellow performers from the Atlanta gay bar's Friday night show, bartenders and “messy faggots.” She likens some of the cast to back-stabbing pot stirrers, and then the disgruntled dragster accuses some performers of being too high to rehearse. The public exit interview of sorts prompted dozens of comments of support from friends. It also spurred a back-and-forth between Leigh and Ashley Kruiz, who outs herself as one of the queens Leigh is critical of but doesn’t name. Drag queens can be messy, but it gets real when the behind-the-scenes drama spills out publicly. Here is Leigh's full post to her Facbeook page:

Wow, what a day! If you look at my page you will see that I never talk about anything or anyone because I only use this for advertising my shows and bookings. HOWEVER!!!!!!! Today I was FIRED from BURKHART'S Pub after 10 years because of some messy ass coworkers who do not have any balls. Typical fags that love to talk shit behind your back. They smile in your face and talk about you to everyone else or while you are on stage. I truly have loved working at Burkhart's for the past 10 years. I've met so many amazing patrons and some coworkers. However, when you work on a cast you have certain people who love to stir the pot and talk shit only because they are looking out for themselves and trying to step on toes to be on top. I have no problem in saying what I said. I'm grown and I own what I say. I have a problem when rehearsal time is set and I take time out of my day to rehearse and I get to rehearsal and some of the girls are high and no rehearsal takes places. How unprofessional. Second, I hate when certain people love to stir the pot and talk about someone but never says what their part of the conversation was or how they bad mouthed that person. But if you are stupid enough to believe that those people are your friends. LMAO be careful because you will get stabbed in the back more than once. Funny how the one in charge couldn't even look me in the face or do the firing because she listens to the shit stirrer and she's the messes of them all. So to Angelica D'Paige, I love you and I'm sorry that you were put in the position to fire me because someone else has no balls. I feel sorry for you all. Karma is a bitch and the truth always comes out. To a certain bartender also show coordinator you are the messest fag I have ever met. You talk shit about everyone and the funny part is why do the bartenders have any say in the show when you are a fucking bartender. I've been an impersonator for 18 years and know how to do my show along with the other girls. Some girls are boring ,some wear the same shit over and over and the crowd talks crap about them. I've always tried to stay relavent and up to date. But I will not apologize for speaking my mind and telling the truth. If you don't speak up to the right people then change will never happen. But instead you would rather be messy faggots and keep complaining about the same things over and over. God bless you, because some of you definately need it. To all the fans and patrons who have tipped me thru the years thank you so much for the love and support. You can find me at BLAKES ON THE PARK every SATURDAY night on cast with the Daring Divas featuring Charlie Brown, Shawnna Brooks, Nichelle Paris, The Lady Shabazz, and Angelica D'Paige. Once again thank you to Burkhart's, Palmer and Miss Mary, and Steve for always doing a good job and making me feel like Burkhart's was home. To some of the girls on the cast, goodbye and I have nothing to say to you ever again. You showed me your true colors and as my mother Niesha Dupree taught me, when they show you who they are, BELIEVE THEM!

OK, I've read enough comments that I can't just not voice my opinion, and this is all I have to say about the situation. The past two times I went out of town to work, I come back to find out my "so called sister" has read me to no end...the second time was to management and also done in front of our special guest. I havnt spoken to you really since this occurred because I'm not two faced, I'm not gonna smile in your face and act like nothing has happened, like you did mine. If you had a problem with me, you should have came to me. I couldnt look you in the face because I'm still in disbelief that you talked shit about me to everyone. I thought we were closer than that, my feelings were hurt. The decision to let you go was a group decision, it wasn't my place to fire you, as I am not the one in charge of Friday nights. Angelica is the Friday show director and it was her place. You were actually gonna get fired before Miss Continental, again for talking shit, this time in front of patrons at the club. However I looked out for you and talked them into giving you a night off. And how dare you throw all of us under the bus and tell management (and on FB) that we were all high at rehersal, just because you were not partaking that paticular day? You don't think that's "MESSY"? LOL What we do outside the club is our own business. I don't understand why you can't just come to work, do your job and go home? It's that simple. I guess all the alcohol consumption can cloud ones judgment? I truly am sorry that this had to happen, we all are. However you are very talented and have alot going for you, I wish you all the best!

And the back-and-forth is on. This from Leigh: Drugs and more.

For the record yes i have smoked and have been clean for 3 months. As far talking about you. It was a dressing room discussion where all the girls bad mouthed u. However they wont admit it. I told u today what i said and if u would have talked to me this could have been cleared up. And as far as bad mouthing the club u have all read management and the bartenders but again you all talk behind peoples back. Just be careful because the shit stirrer is still there and said she should have your paycheck cause she does your job. Live and learn. Lack of communication. I wish u no harm and the best in life.

And Kruiz comes back with this.

I really don't care who "bad mouths" me, it only hurts when it comes from people who you trusted and considered a friend. You also didn't tell me what you had said and I didnt want to bring it up today because the decision to let you go had already been made. You said that I only book my friends to work, I wouldn't return anyones phone calls, and I was a "MESS!" which seems to be your favorite new word. So to address this, please tell me who you consider my friends that I book? I am not really friends with anyone that I have booked, they are aquaintences and co-workers. I don't even hardly communicate with "any" queens outside of work.If I didn't return someones phonecalls it's because I didn't have any openings at the time. You were calling me to get Lateisha booked, I had already talked to Lateisha 4 times and assured her that I would get her in as soon as I could, and I have done so. You were in charge of Friday nights and gave it up, but have complained about everything since. I didn't ask for or want this possition that I have, I hate it. However I have more personal reasons that I could not turn it down. Trust me, I have been in this business for 28 years, I have a very respectable reputation, I have lived and learned! All of this is foolishness, I'm sure your feelings are hurt that you were let go, even though it wasn't the first time you have been fired, and the lack of communication was on your part. You were the one with all the problems and complaints, yet you didn't confront me with any of it?