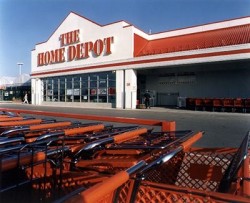 Uh-oh. The gay-friendly ways of Home Depot, so beloved by the gays that they dub the Atlanta-based company Homo Depot, don’t quite match its political giving. So shareholders are fighting back.

Sound familiar? It should. Tar-gay lost its swish and reverted to Target over its bankrolling of an anti-gay pol. Shareholders of Home Depot on Thursday are dipping their toes into the waters of activism to smack down the orange giant and take a bigger role in its political giving.

“They were giving to candidates who were actively rolling back the rights of GLBT people in the states in which they did business,” Julie Goodridge, CEO of NorthStar Asset Management, tells Jim Burress, a gay reporter for Atlanta’s WABE who filed this report for Marketplace Morning Report.

Not surprisingly, Home Depot says it’s the role of their executives, not shareholders, to choose how to make political contributions. The anti-gays smacked Home Depot around last year.

As the issue unfolds, hurry up and vote for Jerusalem House, the HIV group in Atlanta that is up against three other non-profits for $25,000 in gift card larges from Home Depot. Better to take advantage of the retail chain’s gay love while it lasts.

Not for nothing, Home Depot scored an 85 on the most recent Corporate Equality Index from the Human Rights Campaign. They also supported the recent renovation and expansion of the Rush Center.