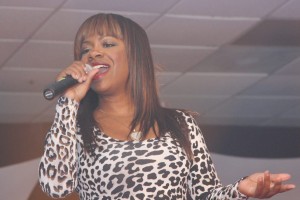 The cast of “The Real Housewives of Atlanta” loves their gays – the on camera ones in heels and the off camera ones who watch the show. Kandi Burruss is no different. She talks with Project Q about the gays, country music and the debut of “The Kandi Factory.”

Kim Zolciak loves Blake’s and the gays love her right back. NeNe Leakes hangs with us, too. Kandi Burruss? Oh yes, the R&B singer and producer not only considers gay fans a part of her family, she takes part in the NOH8 campaign and parties with us as well. Burruss appeared at an MLK holigay event on Jan. 13 where she co-hosted a late night event from Xtreme Entertainment and Rockstars Production that included a packed crowd, heavy beats and a trio of muscled dancers.

That’s where we caught up with her to dish about the gays, her foray into country music and the March 4 debut of “The Kandi Factory.”