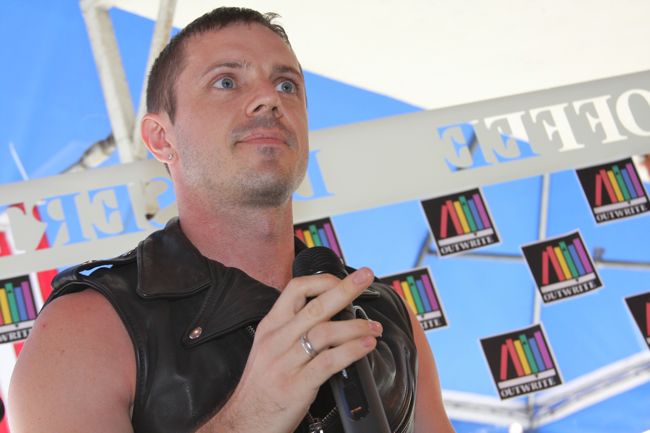 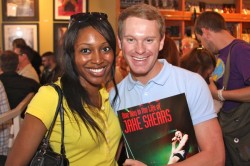 Scissor Sisters frontman Jake Shears, playing on his sex appeal with a snug leather outfit, talked strippers, writing, musicals and “light bulb moments” during an appearance Friday in Midtown ahead of the group’s Atlanta concert.

The openly gay rocker was joined at Outwrite Bookstore & Coffeehouse by Tim Hailand (third photo left), the talented photographer behind the book “One Day in the Life of Jake Shears,” and a crowd of about 100 people. Shears (top photo) popped into the store wearing a sleeveless leather jacket, leather pants and boots, grabbed an iced drink and sat for questions from the crowd before settling into autographing the coffetable book.

Shears’ outfits – the one he wore Friday as well as his concert garb – came up during the Q&A. 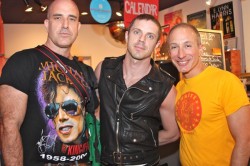 “I would rather just go minimal than be in something I’m not comfortable with,” Shears told the crowd. “It’s a lot of patent leather. Sometimes, I wish we could just play in jeans and a t-shirt.”

After the group’s concert at the Tabernacle, Shears jets off to San Francisco to begin production work on the musical version of Armistead Maupin’s “Tales of the City.” Shears is writing the music for the production, which he said Friday includes nearly two-dozen songs.

“It is really, really an ambitious show. There is nothing simple about it. The show, if we can pull it off, will be amazing,” he says.

Shears told fans that he grew up wanting to write fiction, hinting that there might be a second career as a novelist sometime in the future. But for now, he’s pleased to be an out gay man in the music industry. 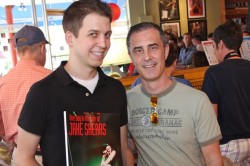 “I hope it makes it easier for ones coming behind to do the same themselves. I hope people can do it earlier and earlier. I couldn’t do what I do in the closet. Being gay sometimes is a cross to bear in this industry, especially in America. There is a mentality still to keep you down a bit,” Shear says.

The rocker, who admitted that he’s uncomfortable listening to his own music on the radio or in public, told fans that he finds his creativity to write music on the dance floor.

“The dance floor has given me the most light bulb moments. That is the best place to get ideas,” he says.

With the quick trip through Atlanta, Shears didn’t say if he had a chance to drop in at one his favorite places in the city: Gay strip bar Swinging Richards. But he did discuss strippers, teased that he’s a bit of an exhibitionist and that he looks for a little more than just nudity when enjoying men without clothes.